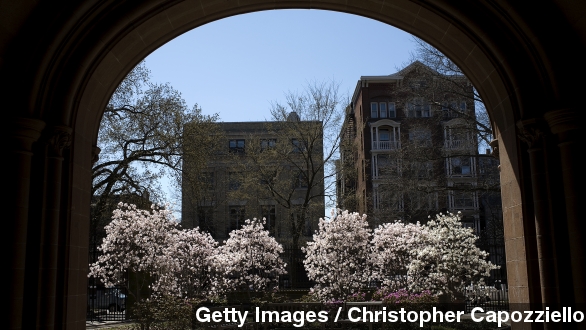 A New York Times columnist whose work includes extensive coverage of issues regarding race and police relations says Yale University police held his son at gunpoint over the weekend while looking for a burglary suspect.

Charles Blow first tweeted about the incident Saturday evening saying his son was "accosted" by a Yale police officer while leaving the campus library. Blow continued to tweet he was "fuming" and referenced the recent high-profile deaths of Michael Brown and Eric Garner at the hands of police officers.

Yale Police say they were looking for a suspect they believe repeatedly stole from students in residential housing on campus this past week.

Police say they received a call Saturday night of suspicious activity matching the suspect's previous burglaries and officers responded. Blow says an officer began following his son, the officer drew his gun and ordered the young man to the ground. (Video via WTNH)

Blow's son was not hurt or arrested and the man police believe is the suspect they were looking for was found elsewhere on campus. The New Haven Independent noted what it called a "prompt and unusually detailed" press release issued by Yale later that night.

Without mention of a firearm drawn, it said, "A Yale College student, who closely matched the description of the suspect, was briefly detained and released by Yale police."

Yale Daily News says a university spokesperson wouldn't comment on whether a firearm was used, though the college dean said he didn't deny Blow's son was stopped at gunpoint.

With the university not surprisingly releasing only a finite amount of details beyond the press release, that leaves Blow by default leading the conversation on the incident. (Video via WTVS)

Blow wrote in a column The New York Times published Monday morning he and his son have no problem getting stopped if he matches a suspect description, but the method of the stop was what disturbed them.

"Why was a gun drawn first? ... Why not ask for ID first? What if my son had panicked under the stress, having never had a gun pointed at him before, and made what the officer considered a 'suspicious' movement?"

He also tweeted out a link to this video over the weekend from The Salt Project titled "10 Rules Of Survival If Stopped By The Police."

Yale says it is reviewing the police response to this incident internally. Blow wrote the dean and university police chief have apologized to his son.