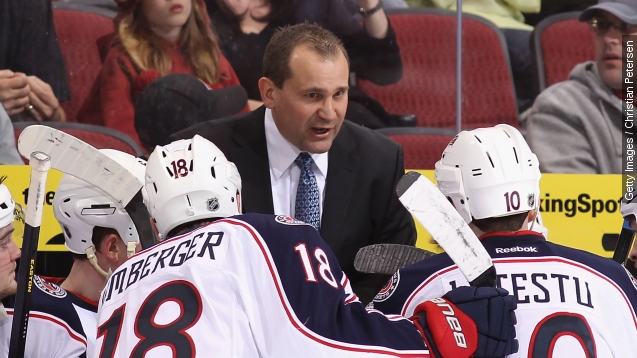 The Blue Jackets fired Todd Richards after a 0-7 start, but the NHL team's issues don't stop with the head coach.

The Columbus Blue Jackets are off to their worst start in franchise history, and their head coach is paying the ultimate price. (Video via NHL.com)

On Wednesday, the NHL team fired head coach Todd Richards after four-plus seasons with the team.

In his place, the Blue Jackets hired John Tortorella, the current Team USA coach for the 2016 World Cup of Hockey.

Tortorella's a bit of a controversial hire. He's always been known as a fiery head coach who says what's on his mind.

"I need to be more respectful to certain people. To me, some are just dogs," Tortorella told TSN.

But he's had successful stints with the New York Rangers and Tampa Bay Lightning, winning a Stanley Cup with the Lightning in 2004.

But he's also been out of an everyday NHL gig since he was fired from the Vancouver Canucks in 2014 after just one season with the team — an oddly short stay for a proven head coach.

And there's no guarantee Tortorella will be able to turn around the Blue Jackets, who are currently 0-7.

Before Richards' firing was even handed down, there was plenty of talk about the roster — not Richards — underperforming.

The Columbus Dispatch's Bob Hunter wrote, "Firing the coach isn’t always the answer. In fact, in probably at least half of the cases, the real answer lies elsewhere." He ended with, "Sometimes, the best moves are the ones you don't make."

Columbus' offense has potential, anchored by Ryan Johansen and Nick Foligno. But it's their defense — giving up nearly 30 shots a game on average — that's looking like it needs to be repaired or, well, completely stripped. (Video via Visa)

It's led to a loss of confidence for their goalie, Sergei Bobrovsky, who signed an extension with the team in the offseason. The Blue Jackets rank last in the league in goalie save percentage and goals against.

Tortorella will have his work cut out for him, but the veteran coach sports a .538 career win percentage, so there's optimism he can somewhat salvage the season.

Play-by-play announcer Everett Fitzhugh and analyst JT Brown will be in the booth for the Seattle Kraken game Thursday against Winnipeg.

The league announced it will open its annual holiday break two days earlier than scheduled because of a rise in positive COVID-19 test results.