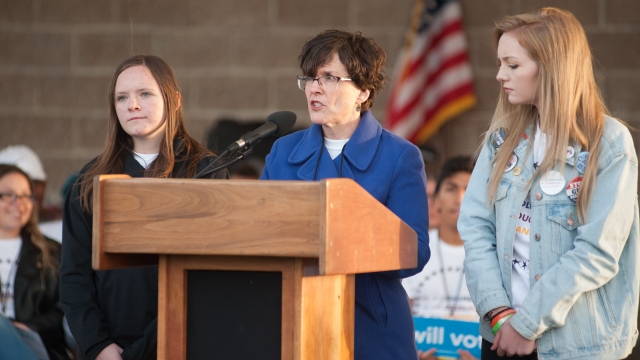 In the 20 years since the Columbine High School shooting, Paula Reed continued teaching at the school.

Paula Reed began teaching at Columbine High School in 1986. She retired last year after 30 years. The English and debate teacher said up to the day of the shooting, she felt safe in school. But she says that changed on April 20th, twenty years ago.

"Our entire school was a crime scene. So the rest of the year we couldn't be there. We were at a different high school," she told Newsy. "But the next school year. You know we're back on our own campus. People felt free to come in and snap photos in front of our school sign. They tried to get into the building to just walk around and see what went on. And you're like, 'this is a school. There are children going to school here. Would you want somebody walking into your child's school?' So that was challenging. It was invasive and that was hard and outsiders were invasive."

Reed stayed for the three years on staff after the shooting, to see the students through to graduation.

For mass shooting survivors, talking about challenges and successes isn't just part of coping, it’s a critical part of their mental health.

"It wasn't but it might be more selfish than you realize. Because I don't, I could not have lived with the guilt of leaving them. So I mean, I would have thought about them nonstop to abandon. We lost two members of our speech team. To say to those kids, 'yeah, you're going to have to deal with Dan and Rachel without me because I can't do this. I'm checking out.' There's no way I could have done that. And I think most of us felt that way." she said.  There was one year that was especially challenging.

"I walked in the third year – on the first day, of the third year – and went 'Oh my God this was a mistake. This was a huge mistake. I should not be here.' And I spent all year breaking out in hives. My hair was falling out. It was bad. So honestly, I probably should have left. But again, I just I can't even imagine leaving those kids."

After three years, Reed took two years off from teaching. But she felt called back – to the school, to teaching, to that community. As time went on, the 1999 shooting became more of a historical event for her students. But for Reed, it was always personal. She began including Dave Cullen’s book Columbine in her curriculum, and invited teachers to share their experiences of the event with her students. She shared hers too.

Reed and colleagues from Columbine also began traveling to other schools — Sandy Hook, Marjory Stoneman Douglas — to share perspective and experience with other teachers. Reed says she didn’t have that option in the days following the Columbine shooting.

"I very briefly tell my story, because whoever is sitting there needs to know exactly how much our stories parallel. Some teachers are going to parallel exactly. My story - I never saw blood. I didn't see anyone get shot. I left the building thinking it was a fire alarm. So that is very different than my colleague, Patty, who was hiding in a cupboard while children were being shot all around her," she says. "But then after I tell my story I say, 'ask me questions.' The old reddit thing, right?"

Reed says the vast majority of the questions she gets from teachers is 'is this normal?' – things like forgetting parts of their shootings' events, or being overcome with emotion. Reed say she's prefers the word typical.

Psychologist Bill Pfohl explains what it's like helping communities get back to their normal routines after a school shooting.

"The old normal is gone and that is true. You will never have it again. So kiss it goodbye. Whoever you were before this happened you need to say goodbye to that person because they're gone forever. You will come to love who this makes you, but it's going to take time," she says.

Paula Reed is honest and direct when she tells her story. She says if she doesn’t have an answer for something, she’s blunt about saying so.

"You know if somebody is honest about the bad stuff, you can believe the good stuff. If all anybody tells you is the good stuff, you figure they're just blowing smoke up your butt. That's not really helpful," she says.

Another thing she’s honest about: In the 20 years since the Columbine High School shooting, she’s disheartened by a lack of solutions to mass shootings.

"I think if we cared, if we genuinely cared. We'd have done something when you have people say it's not the guns, it's the mental health. OK what have you done about that? If you care, what have you done about that? I'm sorry. I don't believe you care and that is devastating to me. New Zealand. Less than two weeks goes by and for better or for worse they cared enough to do something. We won't do anything. That's frustrating."