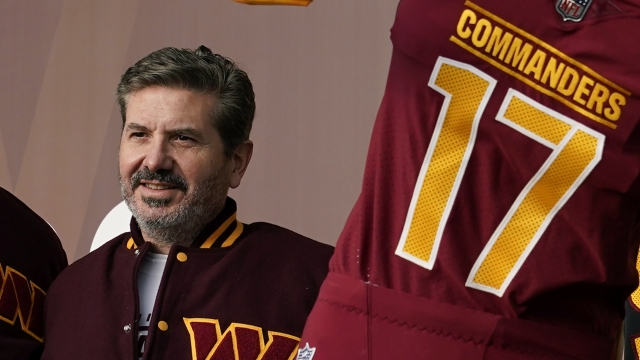 Washington Commanders owner Dan Snyder's status has been widely debated for years amid several scandals and probes into workplace misconduct.

Colts owner Jim Irsay says there’s “merit to remove” Dan Snyder as owner of the Washington Commanders, making him the first NFL owner to publicly state that his controversial counterpart should go.

Snyder’s status has been widely debated for years amid several scandals and investigations into workplace conduct in Washington. The league has been investigating allegations of sexual misconduct and financial impropriety, a probe conducted by attorney Mary Jo White that is ongoing.

Removing Snyder would be unprecedented and requires 24 votes from the other owners.

According to the Washington Post, 15 women accused five men of harassment and verbal abuse, including radio broadcaster Larry Michael.

“It’s something we have to review, we have to look at all the evidence and we have to be thorough and it’s something that has to be given serious consideration,” Irsay said Tuesday. “I believe in the workplace today, the standard that the shield stands for in the NFL, that you have to stand for that and protect that. I just think once owners talk among each other they will arrive at the right decision. Unfortunately, I believe that’s the road we probably need to go down and we just need to finish the investigation, but it’s gravely concerning to me the things that have occurred there over the last 20 years.”

A person familiar with the thinking of several owners told The Associated Press that they agree with Irsay and have serious concerns about the allegations against Snyder. The person, who spoke to the AP on condition of anonymity because the conversations are private, said a group of owners believe Snyder’s dismissal would be best for the NFL and the other 31 teams. The person doesn’t know if 24 owners would vote to remove Snyder, but momentum is building against him.

“There’s no reason for there to be any speculation at this point in time or discussion until we have the facts. That was my message to ownership,” Goodell said. “Speculation without facts is not a very positive thing to do. I think everyone deserves to have the facts and to make sure those decisions are made with facts, and the membership will have that opportunity.”

The Commanders released a statement saying the Snyders will not sell the team.

“It is highly inappropriate, but not surprising, that Mr. Irsay opted to make statements publicly based on falsehoods in the media,” the statement said. “It is unfortunate that Mr. Irsay decided to go public with his statement today, while an investigation is in process, and the team has had no opportunity to formally respond to allegations. The Commanders have made remarkable progress over the past two years. We are confident that, when he has an opportunity to see the actual evidence in this case, Mr. Irsay will conclude that there is no reason for the Snyders to consider selling the franchise. And they won’t.”

At a press conference, Roger Goodell faced tough questions about his time as commissioner and claims of racist hiring practices throughout the league.

Goodell said there’s no timeline for White to submit her report. It’s anticipated she’s nearing the end of the investigation, a person familiar with the matter told The Associated Press. The person spoke to the AP on condition of anonymity because the investigation remains open.

Snyder’s ownership of the Commanders became a big issue again last week when ESPN reported, citing anonymous sources, that he has hired private investigators and told people he has enough information to expose fellow owners and Goodell.

The Commanders denied the contents of the report, calling it “categorically untrue” and “clearly part of a well-funded, two-year campaign to coerce the sale of the team, which will continue to be unsuccessful.”

Snyder addressed the report in a letter to owners.

“That is patently false and intended to erode the trust and goodwill between owners that I take quite seriously,” Snyder wrote in the letter obtained by the AP. “I have never hired any private investigator to look into any owner or the commissioner. I have never instructed or authorized my lawyers to hire any private investigator on my behalf for any such purpose. And I never would.”

Snyder added he did not take for granted the privilege of being able to own an NFL franchise and said he and wife Tanya are available if anyone has questions or wants to discuss any issues.

Dallas Cowboys owner Jerry Jones, a known supporter of Snyder, declined to throw the embattled owner under the bus, despite ESPN’s report of a rift between the longtime confidants.

“I have no knowledge of anything that has got any basis to it,” Jones said.

Tanya Snyder, the team’s co-CEO, and Commanders President Jason Wright represented the team at the meetings.

Snyder and the organization are also currently the subject of an ongoing investigation by the U.S. House Committee on Oversight and Reform. Snyder has owned the team since 1999.

Lawyers representing dozens of former Washington employees wrote a letter to Goodell expressing concern over an element of ESPN’s report last week that indicated Snyder used the league’s independent investigation to gather information on witnesses who participated given the promise of confidentiality.

“After participating in the investigation, and after the NFL revealed witness names, several of our clients were harassed by private investigators, some were publicly disparaged and/or removed from team alumni groups and at least one who was still working for the tram was terminated,” attorneys Lisa Banks and Debra Katz wrote in the letter. “If true, (the ESPN-reported) ‘tip sheet’ allegation is not only normally reprehensible, but it also provides the basis for us to take legal action against the NFL.”

The NFL denied the allegations, with a spokesperson saying the league has repeatedly committed to protecting the anonymity of witnesses who took part in Beth Wilkinson’s investigation.

“The NFL did not share their names with the Commanders and their lawyers,” the statement said. “The allegation is false. Ms. Wilkinson and her firm kept their pledge to the witnesses and did not share their identities with the commissioner or league staff other than the limited number of participants who were willing to be identified.”