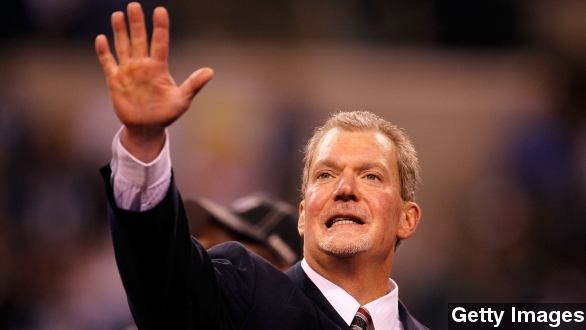 By Danny Matteson
September 2, 2014
Irsay pleaded guilty to misdemeanor DUI charges and was sentenced to a year's probation and regular drug testing in addition to the NFL's punishments.
SHOW TRANSCRIPT

One year of probation, a six-game suspension, a $500,000 fine — those are the punishments the courts and the NFL imposed on Indianapolis Colts owner Jim Irsay after he pleaded guilty to driving under the influence of prescription drugs Tuesday.

Irsay pleaded guilty to the misdemeanor charge in an Indiana court after previously pleading not guilty to two counts of the offense. The charge stems from his arrest by Carmel, Indiana, police March 16.

Citing police records, CBS notes when he was pulled over, officers "continuously had to support Irsay in order to prevent him from falling over." Toxicology reports later showed he had both oxycodone and hydrocodone in his system.

According to The Indianapolis Star, 55-year-old Irsay was also found to have more than $29,000 in cash in a briefcase and laundry bag as well as several bottles of prescription drugs in his Toyota Highlander at the time.

Irsay's ban for six games is in line with what some NFL insiders were expecting. NBC cites a report predicting the owner would get a six- to eight-game suspension.

In a press release, the NFL defined the terms of the ban, saying: "Mr. Irsay may not be present at the club's facility, may not attend any practices or games, may not represent the club at league or league committee meetings or at any other team or league event, and may not conduct media interviews or engage in social media regarding any team or league matters."

Though some, like Deadspin writer Drew Magary, don't believe those stipulations have any teeth. He wrote on Twitter, "I'm sorry Jim, but you're gonna have to watch the first six games from your yacht."

According to Bleacher Report, $500,000 is the maximum fine permitted under league rules and Irsay is the first owner to face suspension since 1999.