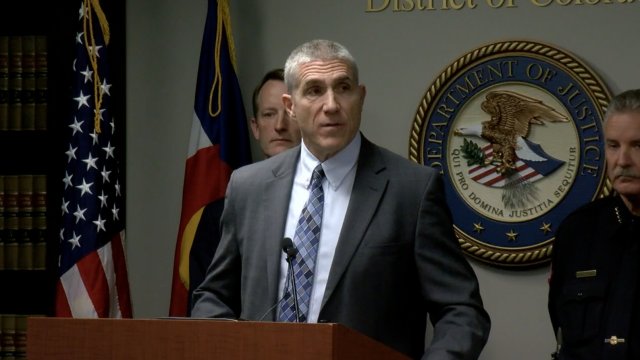 SMS
Authorities Arrest Alleged White Supremacist In Synagogue Bombing Plot
By Lauren Magarino
By Lauren Magarino
November 5, 2019
The Colorado man is charged with attempting to obstruct religious exercise by force. If convicted, he faces up to 20 years in prison.
SHOW TRANSCRIPT

Richard Holzer is charged with attempting to obstruct religious exercise by force using explosives and fire, according to unsealed federal documents.

The 27-year-old confessed to the plot.

He called the plan his "mountain" and Jews and the synagogue as a "cancer" to the community.

He made his first court appearance Monday.

Undercover FBI agents posing as white supremacists uncovered the plot, after connecting with Holzer on Facebook in September and later in person.

"Mr. Holzer indicated that he wanted to do something that would let Jewish people in the Pueblo community know that they are not welcome. and that according to him, they should leave or die," Jason Dunn, U.S. Attorney for District of Colorado said.

Federal documents list examples of posts, including a message Holzer sent to another Facebook user in July saying he was "getting ready to cap people."

Holzer told one agent he was a member of the KKK, is now a skinhead and getting ready for a racial holy war.

He also said he paid a "Mexican cook to hex and poison a local Synagogue" over a year ago.

Holzer's next court date is set for November 7.