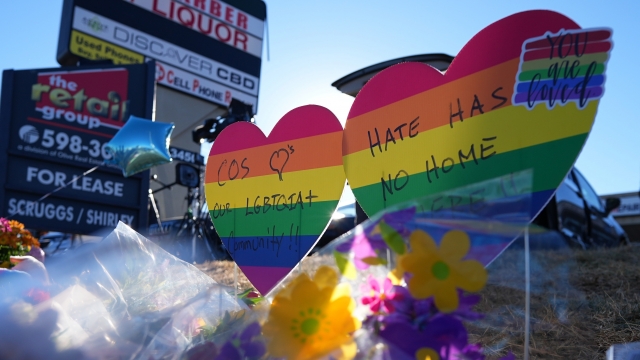 SMS
LGBTQ Groups Link Colorado Shooting To Rising Anti-Gay Politics
By Jamal Andress
By Jamal Andress
November 21, 2022
Groups like GLAAD and Equality Texas say there's a connection between the rise in anti-LGBTQ legislation and a rise in violence against the community.

The horrific mass shooting at a gay club in Colorado Springs comes as anti-LGBTQ rhetoric and violence are on the rise, and amid dozens of bills specifically impacting LGBTQ rights.

While the motive behind the attack is still unclear, LGBTQ groups say the political climate is making conditions ripe for such violence.

"From the massacre of Black shoppers in Buffalo to the killings at an LGBTQ+ nightclub in Colorado Springs over the weekend, we see communications and communities across the nation being targeted for their race, their beliefs and their way of life," New York City Mayor Eric Adams said.

GLAAD — the Gay and Lesbian Alliance Against Defamation — said, "You can draw a straight line from the false and vile rhetoric about LGBTQ people spread by extremists and amplified across social media, to the nearly 300 anti-LGBTQ bills introduced this year, to the dozens of attacks on our community like this one."

According to the The Washington Post, more anti-trans legislation has been filed in 2022 than at any other point in the nation's history.

States like Utah, Idaho and more than a dozen others have restricted trans-participation in youth sports. Arkansas, Alabama and Arizona have all passed laws restricting gender-affirming care. In Texas, 17 anti-LGBTQ bills were introduced on the first day of the Texas legislative session bill filing.

Ricardo Martinez is the CEO of Equality Texas, the largest LGBTQ advocacy organization in the state. 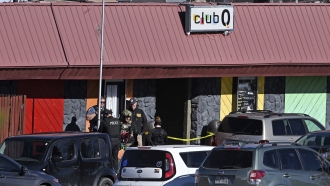 "You cannot demonize and dehumanize people and expect nothing to happen," Martinez said. "What's happening here is that anti-LGBTQ forces are seeking to hold on to power at any cost, regardless of the collateral damage that they inflict on our communities, and that's awful."

GOP lawmakers who have sponsored these bills the LGBTQ community objects to often say they are fighting for parental authority and trying to protect their religious beliefs.

"You actually look at the bill, and it says no sexual instruction in grades pre-k through three, and so how many parents want their kindergartener to have transgenderism or something injected into classroom instruction?" Gov. DeSantis said. "I think the legislature is basically trying to give parents assurance that they're going to be able to go and this stuff's not going to be there."

Data shows violence against this community is on the rise and in some cases has corresponded with these changes in legislation.

According to the Human Rights Campaign, the average number of tweets per day using slurs such as "groomer" and "pedophile" referring to LGBTQ people surged by more than 400% in the month after Florida's bill passed. The Armed Conflict Location & Event Data Project estimates incidents of anti-LGBTQ demonstrations and violence rose 306% from 2020 to 2021.