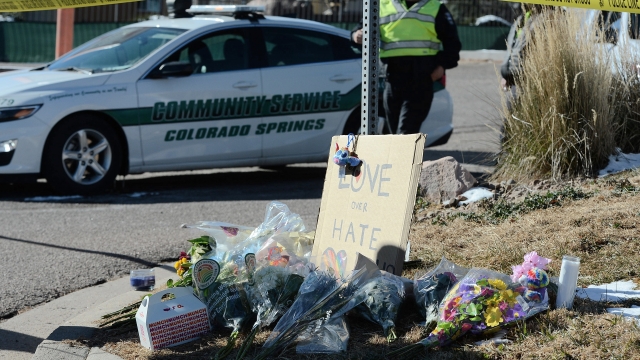 "This is our home. This is our space. We come here just to enjoy ourselves. And this happens," said Joshua Thurman a Club Q patron.

Colorado Springs, Colorado, is reeling after a weekend attack on a popular gay and lesbian club, leaving 5 dead and at least 25 injured.

"Club Q is a safe haven for our LGBTQ citizens. Every citizen has a right to feel safe and secure in our city. To go about our beautiful city without being harmed or treated poorly. I'm so terribly saddened and heartbroken," said Colorado Springs Police Chief Adrian Vasquez.

A 22-year-old man identified by police as the suspect, Anderson Lee Aldrich, is hospitalized under police watch. His injuries have not been released.

While the motive is under investigation, the attack on Club Q happened during Transgender Awareness Week raising questions about hate crimes.

"Every person, regardless of who they are, have a right to be secure from fear and physical harm and actions that strike fear in certain communities will not be tolerated in our community," said Michael Allen, Colorado's 4th Judicial District Attorney. "This is particularly true for communities that have been maligned, harassed, and targeted by persons or groups to intimidate people of those groups."

The shooting at Club Q occurred as anti-gay rhetoric has intensified by extremists.

Authorities say the armed gunman had at least a long rifle when he entered the club just before midnight on Saturday.

"The suspect immediately entered and began shooting inside as he moved further into the club," said Vasquez.

Joshua Thurman says he was inside as shots rang out.

"I was on the dance floor dancing when I heard 4-5 shots. I thought it was the music, so I kept dancing. Then I heard another set of shots and then me and another customer ran to the dressing room and got on the ground and locked the doors almost immediately," said Thurman.

Barricaded inside, Thurman says he called police for help.

"So, we're on the floor of the dressing room and hearing more shots, people yelling, I think somebody tackled the assailant. They beat him up," said Thurman.

Authorities say the suspect was subdued before he could kill more people inside.

The gay and lesbian nightclub is well known locally.

Its Saturday schedule included a drag show with punk and alternative music. The club's Facebook page advertised an all-ages brunch for Sunday morning.

Colorado Springs, a city of nearly a half million people, is about 70 miles south of Denver and home to the U.S. Air Force Academy.

The Orlando community honored the 49 victims of the Pulse nightclub massacre with a "49 Bell" service.

Back in 2015, a gunman targeted a planned parenthood clinic killing three people and wounding eight.

"We are a strong community that has shown resiliency in the face of violence in the past and we will do so again," said Mayor John Suthers.

The shooting also revived memories of the 2016 attack at the popular Orlando gay club Pulse that claimed the lives of 49 people.

Law enforcement officials say they are looking into whether anyone may have helped the alleged suspect, but in these early stages of the investigation they believe he acted alone.

Local law enforcement says police were on the scene of the shooting within minutes after getting the first 911 call.

Colorado Gov. Jared Polis, the nation’s only openly gay man serving as Governor, praised the first responders for what he called their ‘swift response.” He also called the attack “horrific, sickening, and devastating.”

Meanwhile, President Joe Biden said, "There is no place for violence, hatred, and bigotry in America. Yet, tragically, as last night's attack in Colorado Springs reminds us, too many LGBTQI+ people in the United States—and around the world—continue to face unconscionable attacks."