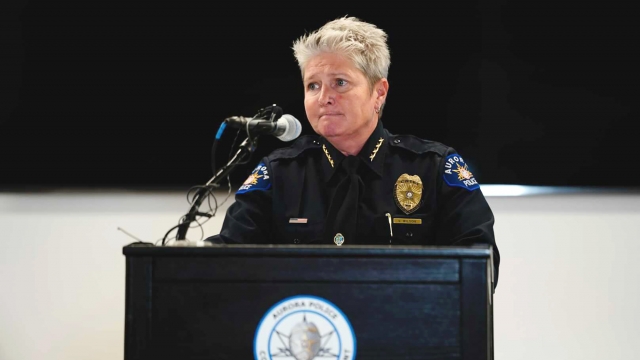 A Colorado police officer has been arrested after video showed him using his pistol to beat a man he was trying to take into custody, choking him and threatening to kill him, while another officer was accused of failing to stop her colleague as required by a new police accountability law passed during racial injustice protests last year.

Body camera footage was released Tuesday of the arrest in the Denver suburb of Aurora, whose Police Department has been plagued by allegations of misconduct in recent years, including the 2019 death of Elijah McClain, a 23-year-old Black man who was put into a neckhold.

In the latest confrontation, which came as the officers responded to a trespassing report Friday, the man repeatedly said, “You’re killing me, bro" as Aurora Officer John Haubert held him down and struck him, the video showed.

“If you move, I will shoot you,” Haubert said. The officer says repeatedly, “Stop fighting,” as the man cries and gasps for air.

Video shows Haubert yelling at him to roll over on his stomach and show his hands, which he does.

“I need water,” the man cried as the video ends.

The Associated Press is not naming the man. He did not suffer serious injury but was taken to a hospital for welts and a cut on his head that required six stitches, police said. Authorities didn't say if he will face charges for an outstanding warrant on a probation violation. It is not clear what race or ethnicity he identifies as, but he appears in the video to be a person of color.

“We’re disgusted. We’re angry,” said Wilson, who took over the department last year. “This is not police work. We don’t train this.”

Haubert is under investigation on suspicion of attempted first-degree assault, second-degree assault and felony menacing, according to arrest warrant affidavits.

His lawyer, Reid Elkus, said he could not comment because it's early in the case but added, “We will be zealously defending Officer Haubert.”

Officer Francine Martinez is accused of not intervening to try to stop Haubert, the documents say. It wasn’t immediately known if she had an attorney to speak on her behalf.