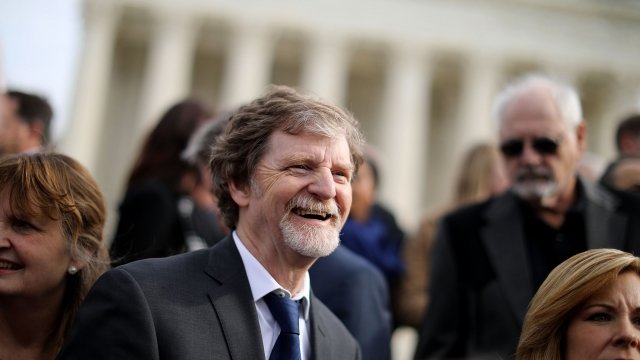 Jack Phillips is the owner of Masterpiece Cakeshop. On Tuesday, he filed a lawsuit against the Colorado Civil Rights Commission, the state's attorney general and the governor. He says the state of Colorado "has been on a crusade to crush [him] because its officials despise what he believes and how he practices his faith."

Let's take this from the top: In 2012, Phillips refused to make a wedding cake for a gay couple. The couple filed a complaint with Colorado's Civil Rights Commission, which ruled in their favor.

Phillips fought the ruling, and the case ended with a narrow Supreme Court decision in June. The high court said the commission showed "hostility" toward Phillips and violated his First Amendment rights.

The new case stems from a June 2017 cake order. Autumn Scardina called the shop to request a custom cake, and she told the employee it was to celebrate her birthday and the anniversary of her transition from male to female.

The shop refused to make the order, and Scardina filed a complaint with the Colorado Civil Rights Commission. In June 2018, the panel sided with her and ordered both sides into mediation to resolve the issue.

That brings us to Phillips' new lawsuit. He says his shop serves its ready-made goods to "all people — no matter who they are, what they believe, or what protected characteristics they have." But the lawsuit says he won't create a custom cake that conflicts with his religious beliefs, regardless of who requests it.

Phillips is asking a federal court to prevent the defendants from enforcing Colorado's public accommodation law against him and his bakery. He's also seeking at least $100,000 in damages.