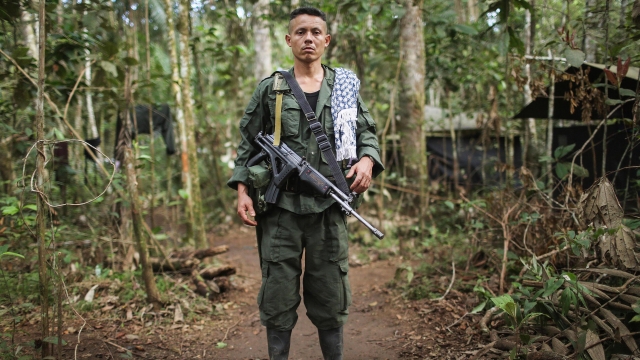 SMS
Colombia And FARC Rebels Try Again With New Peace Agreement
By Ethan Weston
By Ethan Weston
November 13, 2016
Over 220,000 people have been killed during the 50-plus years of fighting.
SHOW TRANSCRIPT

Colombia's government and the Revolutionary Armed Forces of Colombia — or FARC — have agreed to a new peace deal after six weeks of negotiations.

The new agreement comes after Colombia's citizens narrowly voted to reject the original deal, which many thought was too lenient on the rebels.

The deal removes some of those leniencies by listing explicit punishments for FARC leaders' crimes and preventing foreign judges from presiding over FARC trials.

FARC rebels originally went to war with the Colombian government in 1964. Between then and now, over 220,000 people have been killed in the conflict.

There might be a major roadblock to passing this agreement; it still allows FARC rebels to run for office and form their own political party — another reason the original peace accord failed.

The agreement still needs to be voted on by Colombia's Congress before it can be implemented.