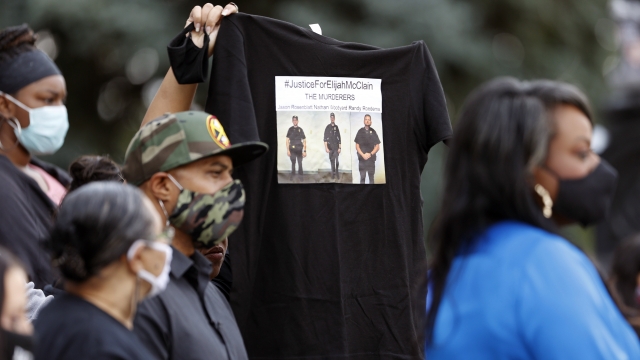 SMS
Colorado Governor Orders Reexamination Of Elijah McClain's Death
By LeeAnne Lowry
By LeeAnne Lowry
June 25, 2020
After a struggle with police, medics sedated McClain with ketamine. He had a heart attack in the ambulance.
SHOW TRANSCRIPT

Colorado's governor says he is looking into reexamining the 2019 death of Elijah McClain, a Black man who died in police custody.

In August, three White Aurora police officers detained McClain as he walked home from a convenience store while wearing a ski mask, which his family says he wore because he was anemic and would get cold. The officers said they approached McClain because of a 911 call about a suspicious person. He resisted arrest, insisting that he hadn't committed a crime.

McClain: "I'm an introvert, please respect the boundaries I am speaking."

Officer: "Relax or I'm going to have to change this situation."

In bodycam footage, McClain tells officers he was resisting because he was trying to stop his music. The officers, who say he reached for a gun, force McClain to the ground and request "more units." They threaten him with a stun gun and later with a police dog. McClain repeatedly says he can't breathe.

A police report says McClain briefly lost consciousness while in a chokehold. The officer released him and McClain struggled again. Paramedics arrived and sedated him with ketamine. A district attorney says McClain suffered a heart attack in the ambulance, and he was declared brain-dead three days later.

He died three days after that. The autopsy report doesn't list a cause of death but shows a "therapeutic" amount of ketamine in his system. Intense physical exertion and a narrow coronary artery were determined to have contributed to his death.

Outrage over his death reignited in the wake of George Floyd's death in police custody and the worldwide protests that followed. More than 2.6 million people signed a petition pushing for a new investigation into his death.

The officers were placed on administrative leave but later reinstated.