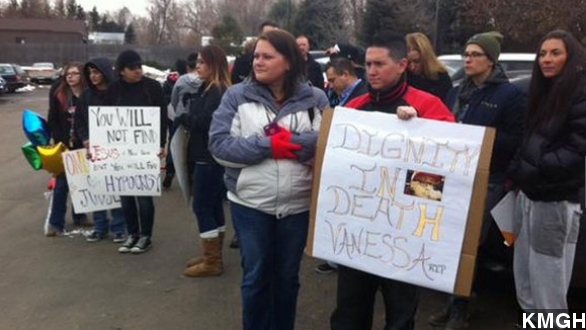 Dozens gathered outside a Colorado church to protest Tuesday after a bereaved family said the pastor stopped a woman's funeral when he found out she was a lesbian.

According to KMGH, Denver's New Hope Ministries ended Vanessa Collier's funeral Saturday after the minister saw a video tribute that showed Collier kissing her significant other, which the family had refused to edit.

"They rented that church, paid $400 for it, even brought their own minister. They say the folks at New Hope knew that Vanessa Collier was gay and didn't have a problem with it until they saw the tribute video showing her kissing the woman," KMGH's Lance Hernandez said.

Due to the last-minute cancellation, Collier's family reportedly had to move the service to a funeral home on the other side of the street — that included moving the casket and flower arrangements.

On Tuesday, Collier's family and friends held a "Dignity Rally" in front of the church to voice their outrage. They say they felt disrespected with the way the minister handled things. (Video via The Denver Post).

"He could've easily allowed the service to take place."

"I was just really hurt that they could pack us up like that and throw us out."

The pastor who called off the funeral defended his actions to KCNC, saying he hadn't been aware of the video until right before the service, and that he gave the family the chance to edit it.

"New Hope did their absolutely very best to accommodate this family in their hour of need," Chaplain Gary Rolando said.

He also told KMGH, "We don't want overt, open homosexuality in our sanctuary." But he did offer an apology, saying, "New Hope is very sorry. ... It's very sad that it happened the way that it did."

Collier died in late December in a firearms accident. She was 33.