Betsy DeVos Is One Vote Away From Losing Her New Job 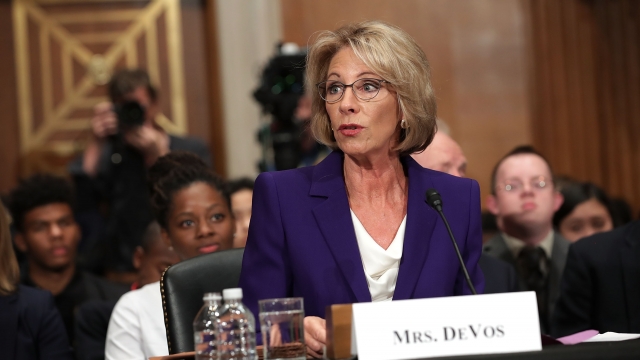 The Senate confirmation vote for education secretary nominee Betsy DeVos could come down to one vote.

"I will not — I cannot vote to confirm her as our nation's next secretary of education," Sen. Susan Collins said.

"I do not intend to vote on final passage to support Mrs. DeVos," Sen. Lisa Murkowski said.

The two Republican senators said Wednesday they will vote no — even though they both voted yes in committee.

"I'm concerned that Mrs. DeVos' lack of experience with public schools will make it difficult for her to fully understand, identify and assist with those challenges, particularly in our rural schools and states like Maine," Collins said.

If all Senate Democrats and both Independents vote against DeVos, the nays would have 50 votes. In the case of a tie vote, Vice President Mike Pence would be the tie breaker, and it's probably safe to say he would support President Donald Trump's nominee.

But if just one more Republican votes no, DeVos would not be confirmed as education secretary. In the history of the U.S., the Senate has rejected only nine presidential Cabinet nominations.