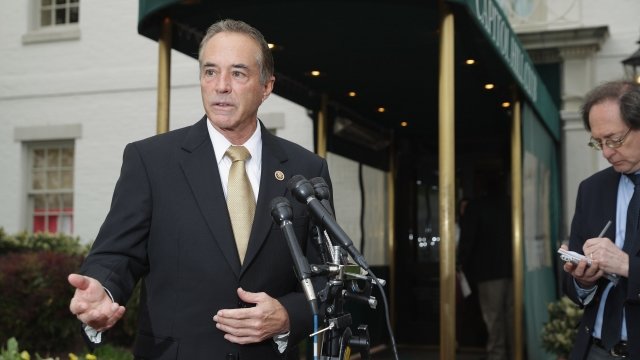 Collins announced his decision in a tweet Wednesday. He said, "The stakes are too high to allow the radical left to take control of this seat in Congress."

The decision is a flip from last month, when Collins announced he was suspending his re-election campaign after he was charged with insider trading.

The Department of Justice charged Collins in August with conspiracy, securities fraud, wire fraud and making false statements to the FBI.

But removing a candidate from an election ballot in New York isn't easy. The three main ways are death, asking for removal, or disqualification. Collins' indictment doesn't disqualify him — in fact a criminal conviction wouldn't do it either.

What would count as disqualification is if Collins were nominated for a different office. So up until earlier this week, Republican officials in New York were engaged in what The New York Times referred to as "a game of musical chairs" — trying to convince Collins to run for a position like town clerk while at the same time interviewing possible replacement candidates for his congressional seat.

But on Monday, Collins' attorney said the replacement process was just too difficult.