College Football Playoff Teams Are Set — Here’s How It Works 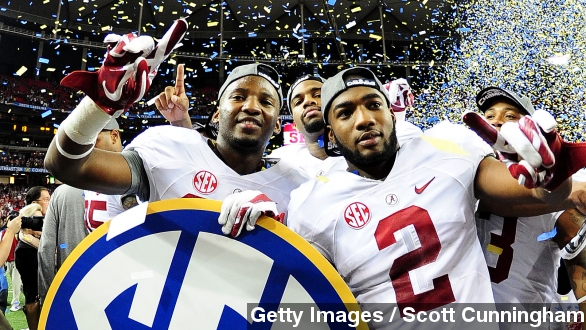 SMS
College Football Playoff Teams Are Set — Here’s How It Works
By Jay Strubberg
By Jay Strubberg
December 7, 2014
Alabama, Oregon, Florida State and Ohio State will battle for the National Championship in the first ever NCAA football playoff.
SHOW TRANSCRIPT

Good riddance, BCS championship. The final four bracket has been set for college football’s first ever playoff to crown a national champion.

For CFP newcomers, here’s how it all works: number one seed Alabama faces fourth seed Ohio State in the Sugar Bowl while number two Oregon and number three FSU duke it out in the Rose Bowl.

Then, the winners of both those games play each other Jan. 12 to decide which team will hoist the newly-minted College Football Playoff National Championship Trophy. (Video via Dr. Pepper)

The other top tier bowl games won’t get snubbed, though.

The Cotton, Fiesta, Orange and Peach Bowls will all host semi-final games over the next two seasons as the six total bowls rotate hosting privileges. (Video via ESPN)

What’s more, you’re gonna get all the college football you can handle come the turn of the New Year.

Those six elite bowl games play in sequence New Years Eve and New Years Day in what’s been dubbed the “New Year’s Six.” And, if that doesn’t satisfy your football cravings...

“There will be 32 more bowls games, including the Famous Idaho Potato Bowl, the Quick Lane Bowl, the Duck Commander Independence Bowl and the Bitcoin St. Petersburg Bowl,” Slate reports.

Now, for most, ditching the old BCS championship for the new final-four playoff system has been a long time coming.

“The great lie of the BCS system is that every game counts,” Sports Illustrated writer Austin Murphy said.

ESPN even poked fun at the long wait.

Speaking of the sports media giant, ESPN reportedly paid $7.3 billion to exclusively broadcast the four-team-tournament for the next 12 years. The broadcast is expected to rake in about $470 million in revenue annually.

And that brings us to the million dollar — or, should we say multi-million dollar— question: who’s making the big money off the new playoff system?

Well, The Power Five are sitting pretty. According to USA Today, the ACC, Big 12, Big Ten, SEC and Pac-12 will each pull in about $50 million in revenue this first year, nearly double their BCS earnings from last year.

Meanwhile, smaller conferences, such as the Sun Belt and Conference USA will divvy up smaller, yet, still sizable, portions of revenue.

So how much do the players get out of this? Not a cent. But that’s a-whole-nother issue altogether.