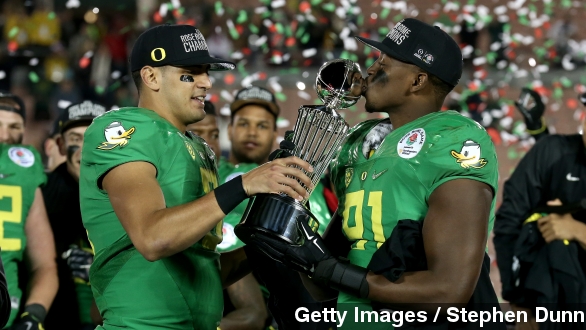 All you have to do is take one look at the ratings to know the first ever College Football Playoff is already a huge success.

That gives the games a combined rating of 15.0 and makes them highest rated non-championship games ever on ESPN and the two highest-rated broadcasts in the history of cable television.

"What an accomplishment."
And, most estimates say ESPN is pulling in about $1 million for every 30-second commercial spot, so healthy ratings like this are probably a good indication ESPN higher ups are all smiles at this point. (Video via AT&T)

"There you are. College Football Playoff Trophy."

After all, this is a quite a big investment. ESPN ponied up a hefty $7.3 billion to exclusively broadcast the playoffs for the next 12 years. (Video via Dr Pepper)

One ESPN reporter says a big reason for this huge ratings spike is that, with the new playoff system, the interest in college football is shifting from a regional to a national scale.

"It felt like it quadrupled the interest in it. ... It felt like there was just more of a criss-cross of interest. Fans and coaches were paying attention to more teams because there were more teams involved," said ESPN College Football Reporter Heather Dinich.

Or as Michigan State head coach Mark Dantonio simply put it, "You're all in one big conference now."

In fact, a Forbes writer thinks, with all the hype and money it's already generating, the new playoff system could end up making college football more popular and more lucrative than the NFL, though it still has quite a way to go.

But, a good start to that argument was on full display last week. More people watched the Rose Bowl and Sugar Bowl than both of the NFL Wild Card games on Saturday.

And to think there's still another game to be played. Oregon takes on Ohio State in the first ever College Football Playoff National Championship Jan. 12 in Arlington, Texas. Those two teams, coincidentally, collided in the first ever NCAA college basketball championship.

This video includes images from Getty Images and audio from Kevin MacLeod / CC BY 3.0.