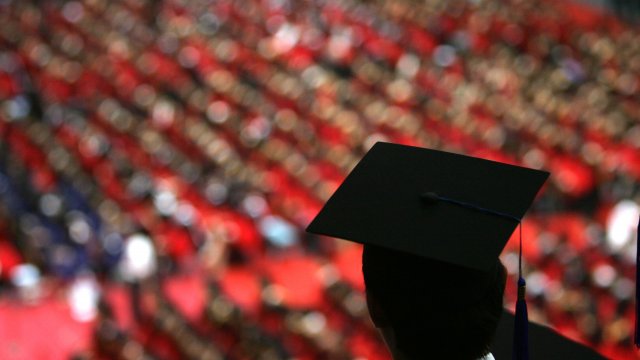 Over the past few decades, college enrollment has climbed rapidly. About 70% of high school grads wind up on the quad, way up from 49% in 1980. College is key to landing a good job and climbing the economic ladder. But there's a hitch: The gap between enrollment and this moment can be a long one, especially for low-income students. That matters because graduation is crucial for earning higher salaries and making gains in an economy that's one of the most unequal in the developed world. 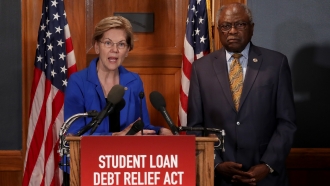 Check this out: In 2017, government numbers show workers with high school diplomas earned on average about $16 an hour. Some college but no degree, $19.50. But with a bachelor's degree, it jumps to $27.50. Advanced degrees earn even more. Considering America's current income inequality, here's where the cycle becomes self-perpetuating.

A chief obstacle for getting across the graduation stage is a student's financial past. When experts followed students' college completion rates, the lowest economic group held pretty steady (11%) whether born in the 1970s or '80s. But in the highest group, 60% graduate — a big jump in the same timespan.

Nailing down the specific cause of dropouts and persistent lower earnings can be difficult. One explanation could be money. Tuition that ran $2,000 at a four-year public university in 1980 is now around $10,000. But experts think there's more at play. Sociology professor Elizabeth Armstrong attributes the high dropout rate to campus cultures that working-class students find difficult to adjust to, feeling isolated and eventually giving up.

On top of that, a disproportionate share of low-income students just aren't academically ready. The organization that runs the ACT test looked at 400,000 scores, and Inside Higher Ed reports "half of the low-income students failed to meet any of the four ACT college readiness benchmarks compared to 31 percent of all students."

So where to begin? Academics? Economics? Culture? Experts suggest policies that go beyond getting low-income students into college. Focus instead on all four years with deeper social connections and academic support.