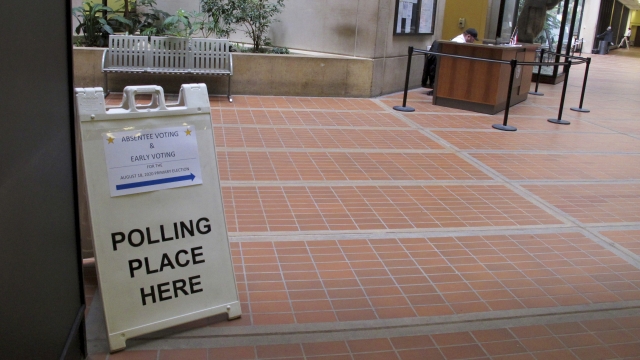 SMS
COVID-19 Moves College Campaigning Online
By Amy Morona
By Amy Morona
August 26, 2020
Student-led political groups who are normally a driving force behind getting out the college vote are shifting their playbooks.
SHOW TRANSCRIPT

College campuses can be busy places around election time. But as many classes move online and campuses work to enforce social distancing rules, things look different this semester.

One in ten eligible voters will be between the ages of 18 and 23 this year, and a recent Knight Foundation survey found nearly three-quarters of college students say they absolutely plan to vote this November.

And student-led political groups who are normally a driving force behind getting out the college vote are shifting their playbooks.

“If this were a normal year, we would have phone banking, canvassing," said Ellis Clark, Outreach Director for the Brown University College Democrats.

College Democrats at Brown University say the situation may expand their reach. Their Rhode Island school offered them more access to student email listservs since on-campus opportunities to engage students, especially those who might not be heavily interested in politics, are limited.

The group sent out about 50 invites for a Zoom watch party during night three of the recent Democratic convention.

“And yet, I guess they spread the word to some of their friends and we got 90 kids to show up," Clark said. "I was only anticipating maybe 25, 30 kids if that had been in person.”

And it’s not just the presidential election that students are working on.

Researchers at Tufts University identified the top states where young people had the strongest potential to influence the outcomes of Congressional races  — including North Carolina.

“Our primary focus is actually on down ballot races," said Maya Pillai, administrative vice chair of the North Carolina Federation of College Republicans.

Outside of sharing content and hosting conversations on social platforms, one tactic they’re using to engage students is through facilitating virtual internships with local candidates.

“Internships are a great way for students who may be on the fence about, ‘well, I don't know where I lie, but I don't really want to door knock in the heat, I'm not probably the best at phone banking, but I'm really good at data entry, or creating a social media account for a candidate,'" she said.

Another change students will need to navigate this semester is how they vote.

“How do we help students learn how to vote if they request their absentee ballot here, and then they decide to move back to their hometown and have to restart the process completely," said Jocelyn Roof, founder of Hawk The Vote at The University of Iowa. "I think that's something that a lot of people at different campuses are really worried about, because those absentee ballot request forms and absentee ballots are not forwardable.”

Roughly half of students recently polled said they plan to vote by mail. Experts advise students to read up on their state’s voting laws, update their voter registration, and create their own voting plan.