Colleagues React To Death Of US Sen. John McCain 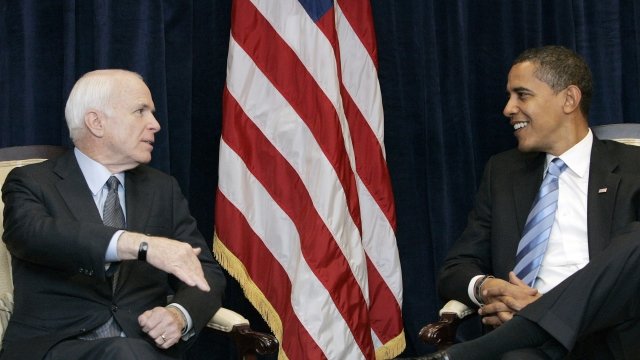 In the wake of Sen. John McCain's death on Saturday, there's been an outpouring of condolences and praise from friends and former rivals alike.

Former President Barack Obama, who defeated McCain in the 2008 presidential election, put out a statement praising him. Obama wrote: "All of us can aspire to the courage to put the greater good above our own. At John's best he showed us what that means." The McCain family has reportedly asked the former president to give a eulogy at the senator's funeral.

President Donald Trump, who infamously said McCain was "not a war hero," tweeted, "My deepest sympathies and respect go out to the family of Senator John McCain."

Senate Majority Leader Mitch McConnell wrote in a statement that it was "a deeply sad day for the Senate and for our nation," and Senate Minority Leader Chuck Schumer has proposed naming a Senate office building after McCain.

Flags at the White House and the U.S. Capitol Building were flown at half-staff Sunday to honor McCain.