Did The Clinton Campaign Throw Powell Under The Bus? He Thinks So 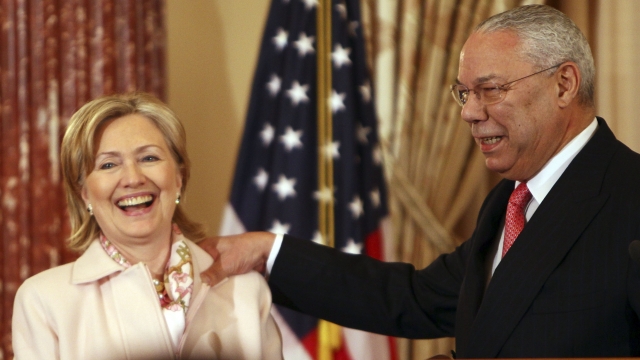 "Although there is evidence of potential violations of the statutes regarding classified information, our judgment is that no reasonable prosecutor would bring such a case," FBI Director James Comey announced in July.

Before FBI Director James Comey announced he would not recommend charges related to Hillary Clinton's use of a private email server, Clinton sat down with the FBI for an interview.

And she reportedly told them former Secretary of State Colin Powell suggested she use a private email account.

Powell responded to those reports on Saturday, and he didn't mince words, telling People, "Her people have been trying to pin it on me."

Parts of the leaked notes from the FBI's interview with Clinton seem to support reporting in a yet-to-be-released book. The book, by journalist Joe Conason, details a supposed dinner conversation between several former secretaries of state and then-Secretary of State Clinton.

Apparently, an advance copy of the book says, "Powell told her to use her own email, as he had done, except for classified communications, which he had sent and received via a State Department computer."

On Friday, Powell's office told NBC, in part, "General Powell has no recollection of the dinner conversation. He did write former Secretary Clinton an email memo describing his use of his personal AOL email account for unclassified messages."

Powell also told People, "The truth is, she was using [the private email server] for a year before I sent her a memo telling her what I did."

Regardless, it doesn't sound like there are any hard feelings. Powell said, "It doesn't bother me. But it's okay; I'm free."

So how did People — of all outlets — get this political scoop?

They caught up with Powell at a fundraiser in the Hamptons, to the surprise of many.