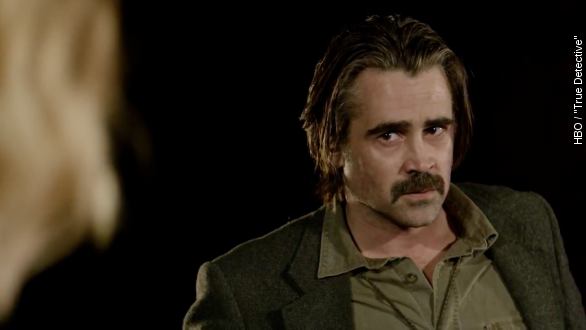 HBO's incredibly vague trailer for the second season of "True Detective" sent the media into a speculative frenzy Thursday.

Most of which centered on that mustache.

Yeah, the biggest takeaway from this trailer seems to be that Colin Farrell is sporting a mustache with a so-so level of success.

But, hey — let's not forget about this Fu Manchu disaster from season one.

To be fair, the trailer doesn't go into much detail about the show, so why not talk about the mustache? There is no dialogue and, in typical "True Detective" fashion, we just get a bunch of shots of people brooding. Thankfully, HBO put out a summary of this season's plot alongside the trailer.

Farrell, Rachel McAdams, and Taylor Kitsch are all cops in California brought together to investigate a bizarre murder that will somehow intertwine with Vince Vaughn's criminal enterprise.

Of course, all the characters have some kind of dark past. There's a conspiracy involving law enforcement, billions of dollars and the occult. You get the drill.

The trailer also gave us our first glimpse at McAdams looking uncharacteristically tough as a detective.

Vaughn is looking a little worse for wear in the trailer. This show is definitely going to be a big test for him. "True Detective" is a far cry from "Old School" or "Wedding Crashers," after all, and there has been a lot of discussion he might not fit into such a serious role that well.

But lets not forget there was another actor stuck in a rut until he proved his chops on "True Detective" and turned his career around.

"Like a lot of dreams, there is a monster at the end of it," said Mathew McConaughey in season one of "True Detective."

Probably the biggest reveal in the trailer is the release date. Season two will premiere June 21 on HBO.