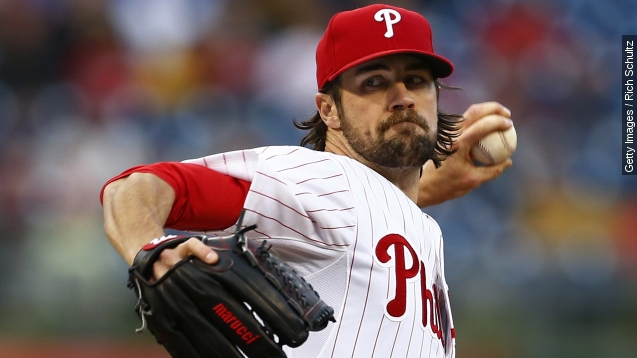 SMS
Cole Hamels' No-Hitter Helps Phillies' Trade Talks
By Tom Kackley
By Tom Kackley
July 27, 2015
The price for Philadelphia Phillies ace starting pitcher Cole Hamels could be on the rise after he threw his first no-hitter in the major leagues.
SHOW TRANSCRIPT

It's sweepstakes season in baseball, and the price for the biggest name on the market might be rising.

The Phillies' Cole Hamels pitched a masterful no-hitter against the Cubs on Saturday, striking out 13 batters and walking only two.

It's a highlight in a season filled with lowlights for the Phillies, the owner of baseball's worst record and a team in desperate need of rebuilding.

While the no-hitter doesn't help Philadelphia much in the standings, it could increase the trade value for the ace starting pitcher.

Hamels was having his worst statistical season in terms of earned run average since 2009 with a 3.91 ERA going into that start. However, analysts say his value didn't diminish.

"We were told all along he was healthy, and his stuff was still really firm, and it was good. He was just playing for a bad team, and he made some bad pitches," ESPN analyst Tim Kurkjian said.

Another factor could drive up the price for Hamels even more. Cincinnati traded its All-Star ace Johnny Cueto to Kansas City on Sunday, leaving fewer options for other teams looking for a pitcher at the trade deadline.

The Phillies signed Hamels to a massive six-year, $144 million contract in 2012, which immediately prices some teams out of the running for the three-time All-Star.

But some teams could have the cash to land Hamels, including the Rangers, the Cubs and the Yankees — all contenders for a playoff push.

But of course, the Phillies could decide to keep Hamels if the return isn't high enough. The Phillies could have dealt Hamels before the trade deadline last season but decided against it because it couldn't get the deal it wanted for Hamels.

We'll know where Hamels spends the remainder of the 2015 season this week. The trade deadline arrives July 31.

This video includes images from Getty Images music from Breakzlinkz / CC BY 3.0.