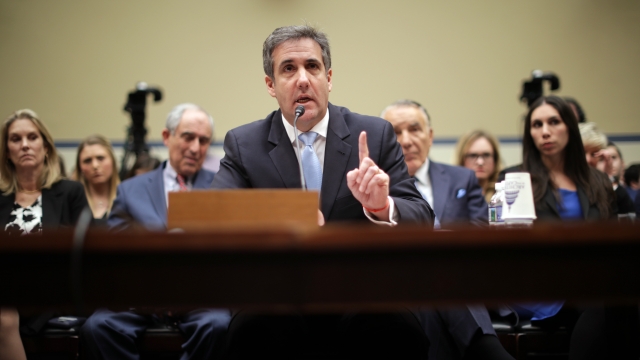 During his public testimony in front of the House oversight committee on Wednesday, Michael Cohen suggested federal prosecutors in New York are investigating allegations involving President Donald Trump — but said he couldn't go into specifics.

Rep. Raja Krishnamoorthi asked Cohen about the last time he talked to the president, and Cohen said they spoke about two months after the FBI raided his home and office last year.

But Cohen also said he couldn't explain what he and President Trump talked about because it's being investigated by the Southern District of New York and he's been asked not to discuss it.

Krishnamoorthi then asked if Cohen was aware of any wrongdoing or illegal acts involving the president that Cohen and the committee hadn't discussed. He answered yes.

Cohen said: "Yes. And again, those are part of the investigation that is currently being looked at by the Southern District of New York."

The Southern District has investigated alleged hush money payments made to women who say they had affairs with the president. But since Cohen already talked about that in his testimony, it seems likely the investigation he mentioned Wednesday was a different one.

Republicans continued to question whether Cohen, who has been convicted of lying to Congress, was telling the truth on Wednesday. The Trump campaign's national press secretary said in a statement that Cohen is a "felon, a disbarred lawyer, and a convicted perjurer." She also said that "what [Cohen] says is evidence" is "worthless."

The House oversight committee's chairman said Cohen would have a lot to lose by lying. He's already going to prison for fraud and lying to Congress, and if he lied again, he could see a longer sentence.