Cohen Says Trump Is Still Lying And Mueller Has Proof 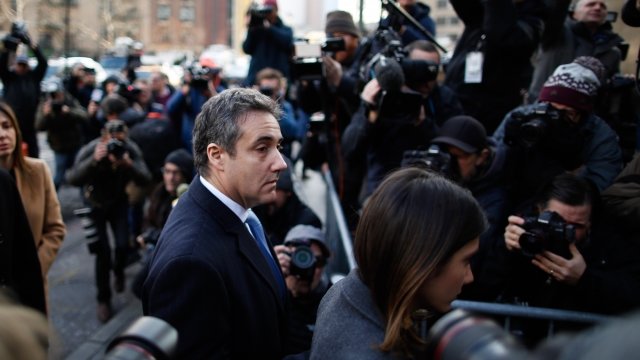 By Stephanie Liebergen
December 14, 2018
In an interview with ABC News, Michael Cohen defended himself against attacks from his former client, President Donald Trump.
SHOW TRANSCRIPT

Just one day after receiving a three-year prison sentence, Michael Cohen sat for an interview with ABC News to defend himself against attacks from President Donald Trump.

"It's never good to be on the wrong side of the president of the United States of America," Cohen said.

The president's former personal attorney pleaded guilty to multiple financial fraud charges and lying to Congress. In doing so, he implicated Trump in some of his wrongdoing.

Trump has repeatedly claimed he did nothing wrong. But in the interview, Cohen insisted that he's telling the truth and Trump is lying. Cohen said, "The man doesn't tell the truth. And it is sad that I should take responsibility for his dirty deeds."

White House staff says Cohen is the one with a history of lying.

"He's a self-admitted liar, you guys all know that, and for him to say I'm going to stop lying now, starting now, is somewhat silly," deputy press secretary Hogan Gidley said.

Trump claims that Cohen pleaded guilty to "embarrass the president and get a much reduced prison sentence."

Cohen says special counsel Robert Mueller's office has evidence that corroborates his version of events. But until that evidence becomes public, it's one man's word against the other's.