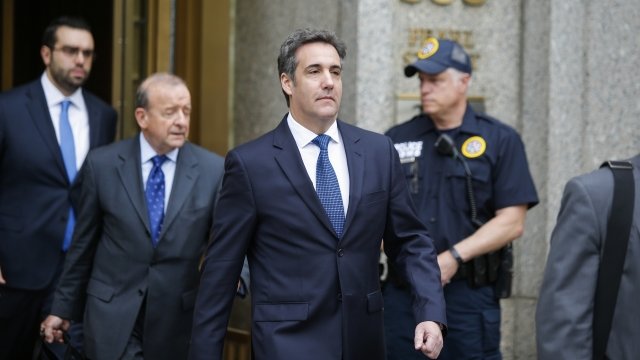 SMS
Cohen May Not Accept A Pardon From The President If It's Offered
By Katie Cammarata
By Katie Cammarata
August 22, 2018
Michael Cohen's attorney told multiple outlets that he isn't even hoping for a pardon from Trump.
SHOW TRANSCRIPT

Cohen's attorney told multiple outlets that Cohen isn't even hoping for a pardon from Trump.

During the hearing, he admitted to violating campaign finance laws to pay off Karen McDougal and Stormy Daniels, both at the direction of then-candidate Trump.

Cohen's attorney told MSNBC he's willing to tell special counsel Robert Mueller everything he knows regarding the investigation into Russian meddling in the 2016 U.S. election.

President Trump tweeted Wednesday morning, saying Cohen made up stories to get a "deal" and that the two charges of campaign finance violations weren't actually crimes.

Cohen's sentencing is set for Dec. 12.