Coffee Then Napping: The (New) Key To Alertness 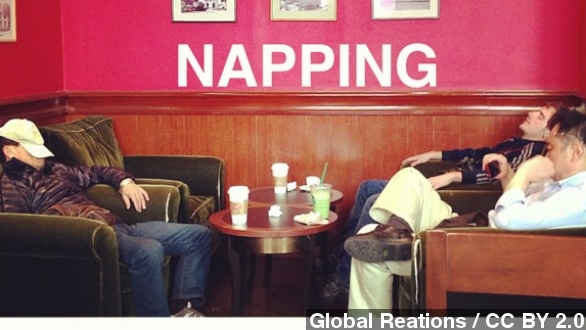 SMS
Coffee Then Napping: The (New) Key To Alertness

By Jasmine Bailey
August 30, 2014
Researchers say having a cup of coffee then taking a nap is more effective than a nap or coffee alone.
SHOW TRANSCRIPT

You know, sometimes coffee just isn't enough to get through particularly sleepy days. And a 20 minute nap might just make you feel more tired.

So why not just combine the two together for a coffee nap?

​​WNYW: "It sounds confusing but there's actual science behind this. Reserchers now say having a cup of coffee then sleeping for 20 minutes is an effective way to nap and feel refreshed."

Yup, it's believed having coffee and then napping is better than just coffee or a nap alone. Vox just published an exhaustive examination of the practice.

According to the outlet, ​"if you caffeinate immediately before napping and sleep for 20 minutes or less, you can exploit a quirk in the way both sleep and caffeine affect your brain to maximize alertness."

KTLA: "And that's because it takes about 20 minutes for caffeine to work in your brain. So the nap ends just as the caffeine​ begins."

This study out of Japan backs the coffee nap idea. Ten participants were involved and the findings showed those who took a coffee nap did better on memory tests than those who solely took a nap.

And other studies, like this one, also back the findings, writing, "​Caffeine and nap significantly reduced driving impairments, subjective sleepiness, and electroencephalographic (EEG) activity indicating drowsiness."

Now, there are a couple important tricks to the who coffee nap experience.

First, you have to drink you cup of Joe quickly because you don't want the effects to kick in before you even get to lay your head down.

Second, quick nap — emphasis on quick. Anything longer will allow your brain to fall into a deeper sleep which in turn makes waking up a little more difficult.

And you definitely want to be awake when the caffeine kicks in. So, now you know a quick tip that will hopefully make those Monday afternoons a little easier to get through.

This video includes images from Getty Images, Global Reations / CC BY 2.0 and Juanedc / CC BY 2.0.