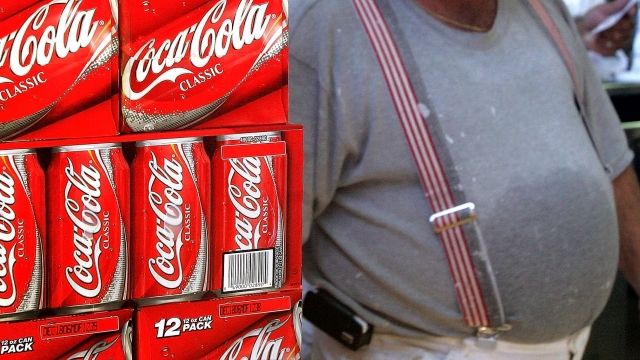 SMS
Coca-Cola Gets Sued For Claims It Made About Obesity And Its Drinks
By Ryan Biek
By Ryan Biek
January 5, 2017
A new lawsuit alleges Coca-Cola paid "experts" to tell the public that a lack of exercise, not sugary drinks, causes obesity.
SHOW TRANSCRIPT

A lawsuit is accusing Coca-Cola of misleading people about the potential health risks of its sugary drinks.

The complaint filed Wednesday in California alleges Coca-Cola and its parent company have falsely advertised that its sugary drinks aren't scientifically linked to obesity, diabetes and cardiovascular disease.

It also argues Coca-Cola paid "experts" and used ads to convince the public that a lack of exercise, not sugary drinks, causes obesity.

Coke and its parent company are accused of doing that through an industry-wide campaign. The suit claims they promoted the idea that all calories, no matter where they come from, are as equally good or bad for the body.

This is from an ad: "All calories count, no matter where they come from –– including Coca-Cola and everything else with calories."

And in recent years, scientists who received funding from Coca-Cola have claimed more exercise, not cutting calories, was the scientific way to lose weight.

Related StoryThe Feds Are Fed Up With Your Sugar Intake

A company spokesman told Quartz the lawsuit is "legally and factually meritless."

Other studies have found diet affects weight a lot more than exercise.