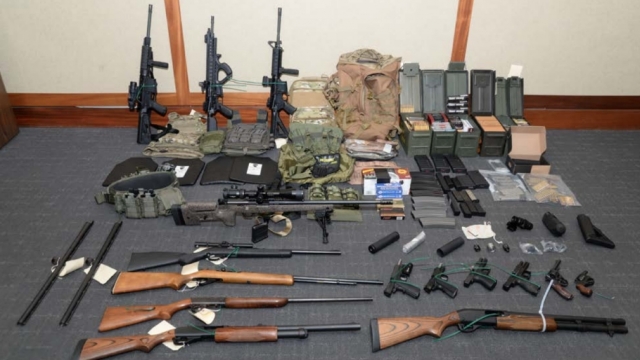 An active-duty Coast Guard lieutenant who was allegedly planning acts of mass terrorism was indicted Wednesday on gun and drug possession charges.

Lt. Christopher Hasson was arrested Feb. 15 when law enforcement uncovered steroids, narcotics, over a dozen firearms and 1,000 rounds of ammunition in his home. Prosecutors called the stash "the tip of the iceberg."

Investigators recovered deleted email drafts outlining his intentions. According to prosecutors, he self-identified in these drafts as a white nationalist and said liberalism is destroying "traditional peoples esp white." In one email he mentioned biological attacks — like starting a plague — followed by attacks on the food supply. He also said he wanted to "kill almost every last person on the earth."

He allegedly was inspired by the manifesto of a Norwegian terrorist who was convicted in 2011 of killing 77 people.

If Hasson is convicted on all charges, he could face up to 31 years in prison. Federal prosecutors have to rely on non-terrorism charges because domestic terrorism isn't a federal crime. His attorney said it's "not a crime to think negative thoughts about people ... or doomsday scenarios."