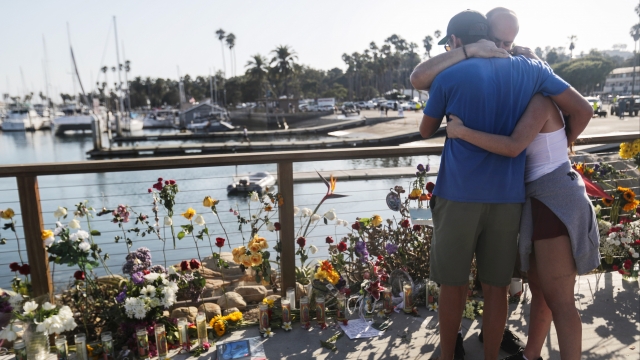 In the wake of a deadly California boat fire, the U.S. Coast Guard has issued new safety requirements for passenger vessels.

The bulletin asks boat operators to make sure all required firefighting and lifesaving equipment is operational, that all emergency escapes are clearly identified and functional, and that crews are properly trained. The Coast Guard also recommends operators limit unsupervised charging of lithium-ion batteries.

These types of batteries are used in cell phones, laptops and tablets. Investigators have not yet identified what caused the Sept. 2 fire on board the Conception. But the Coast Guard's bulletin suggests they may be looking into whether devices being charged may have sparked the blaze.

Thirty-nine people were on board the commercial scuba diving vessel. The majority were passengers who were likely sleeping below deck when the fire broke out. In total, 34 people died. The only survivors were five crew members who happened to be in the main cabin.

Divers recovered the remains of the last victim on Wednesday. Officials are still conducting DNA tests to confirm some of the victims' identities.