Convert Or Close: The Big Choice Many Coal Plants Are Facing 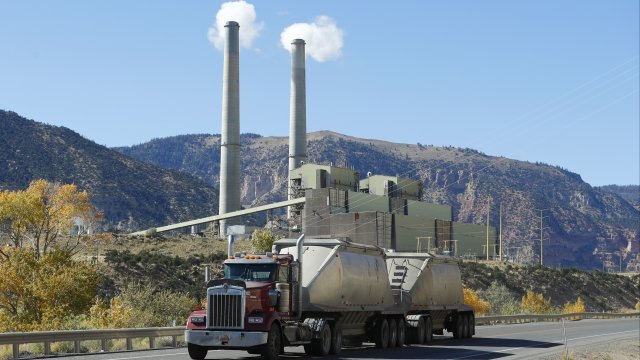 The Trump administration wants to make the U.S. more coal-friendly, but many plants that once created power from coal have already left the industry.

Many coal plants have already started or even finished transitioning into natural gas plants to stay alive, even though the Trump administration is trying to bolster support for the coal industry.

Coal isn't the moneymaker it used to be. In 2008, the U.S. got about half its power from coal, but that's now fallen to 31 percent. And of the roughly 700 coal plants operating in the U.S., 122 are more expensive to run than alternative energy sources; 163 are scheduled for closure or conversion to natural gas.

Now, natural gas is the biggest source of electricity in the U.S., and in some cases, combined-cycle coal-and-natural gas plants can generate more power than coal-only plants. It's also relatively cheap and easy to retool coal boilers to fire natural gas.

Free training from a Chinese company could put some of Wyoming's out-of-work coal miners to work on wind farms.

Switching to natural gas can also help some coal plants meet legal emission standards because natural gas produces nearly half as much carbon dioxide as coal. Plants that make full conversions also get rid of most of their sulfur dioxide and particulate matter emissions.

And the U.S. isn't alone. Beijing recently finished a five-year project to get rid of its coal plants by either shutting them down or completely switching them to natural gas.