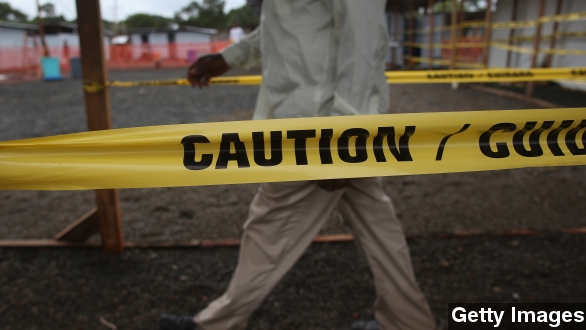 By Ben Lawson
August 29, 2014
Five co-authors of a study on Ebola died after contracting the disease and never saw their work published.
SHOW TRANSCRIPT

In a tragic example of the risks health care workers take when dealing with Ebola, five co-authors of a study on the deadly virus have died after contracting the disease.

They include three nurses, one lab technician and one physician. They were part of an international team of more than 50 people who worked on the study, published Thursday in the journal Science.

​The researchers tracked how the disease spread through Sierra Leone. They also sequenced and analyzed the genomes of the Ebola virus to track how it has mutated over the course of this outbreak.

But, these researchers did not die in vain. The Los Angeles Times writes the findings will help scientists learn more about the virus in order to develop more effective drugs and vaccines.

The Washington Post calls their study's findings "extraordinary" and said: "The study demonstrates just how effective an international research effort can be in the middle of a global health crisis."

Among the authors who never got to see their work published was Sierra Leone's top Ebola doctor, Sheik Umar Khan.

Al Jazeera reports the country's health minister called him a "national hero" and praised the sacrifices he made to help others.

The World Heath Organization warns that Ebola is only spreading more. Forty percent of the total number of cases have occurred in the last 21 days and could eventually infect 20,000 people across West Africa.