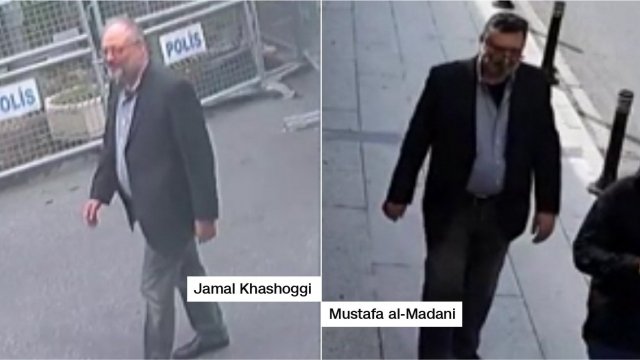 By Stephanie Liebergen
October 22, 2018
The man was spotted by multiple cameras around Istanbul appearing to wear the clothes Jamal Khashoggi wore into the consulate before he disappeared.
SHOW TRANSCRIPT

CNN reports that surveillance video shows a Khashoggi look-alike leaving out the back door of the Saudi consulate in Istanbul less than two hours after the journalist walked in the front door. That person appeared to wear Khashoggi's clothes, a fake beard and glasses.

The body double was then spotted on other surveillance feeds around Istanbul, including one near the city's famed Blue Mosque.

Saudi Arabia claims a rogue group killed Khashoggi during a fight inside the consulate. But that story came after the country denied knowing anything about his disappearance or death for more than two weeks.

According to Turkey, a hit squad of 15 men traveled to Istanbul to kill Khashoggi. And the man who allegedly acted as the body double was part of that group.