CNN Had No Time For 2 Big Topics. Here's What Did Get Time. 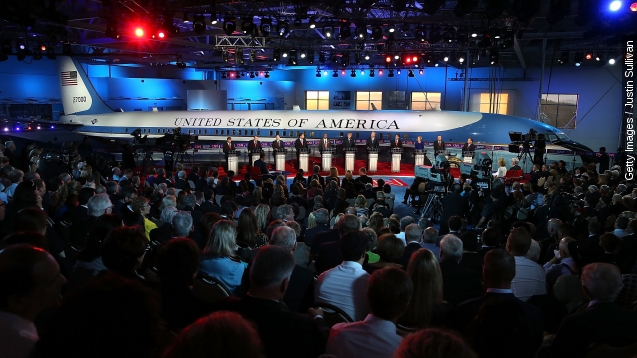 SMS
CNN Had No Time For 2 Big Topics. Here's What Did Get Time.
By Christian Bryant
By Christian Bryant
September 17, 2015
There were topics moderators didn't get to in CNN's three-hour-long GOP presidential debate. Here are some topics CNN did cover.
SHOW TRANSCRIPT

"There were two subjects in particular that I wish, I mean, it's hard to argue the debates could've been longer, but I wish we'd gotten to," CNN's Jake Tapper said.

Here's what there was time for.

"What would you want, Gov. Christie we'll start with you, your secret service code name to be?" Tapper asked Christie.

"Mr. Trump later said he was talking about your persona, not your appearance. Please feel free to respond what you think about his persona," Tapper said to Carly Fiorina.

"I want to give the person you called a hypocrite a chance to respond. You want to identify that person?" Tapper asked.

"I think if we left it open we could see how many people smoked pot in high school," Rand Paul said.

"He was talking about me," Jeb Bush said.

"What woman would you like to see on the $10 bill?" Tapper asked the candidates.

"It's a heartbreak, honestly. ... We tried to let the candidates debate. ... Whoever's doing the next debate, let me know. I'll forward... CNBC? You have my number," Tapper said.