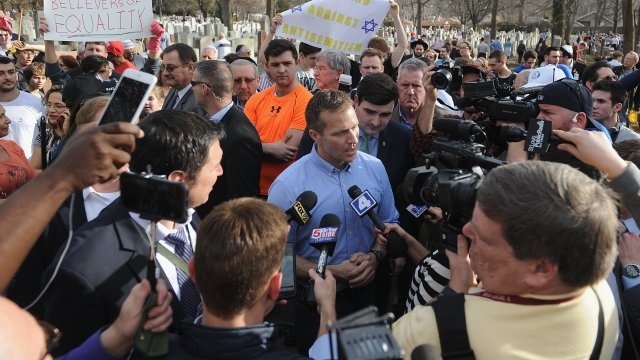 SMS
CNN: FBI Asks Mo. Lawmakers About Coercive Tactics From Greitens' Team
By James Packard
By James Packard
May 21, 2018
CNN says Missouri lawmakers are getting questions from the FBI about associates of the state's embattled governor bribing or threatening them.
SHOW TRANSCRIPT

CNN reports the FBI is questioning Missouri lawmakers about possible bribes or threats from allies of Gov. Eric Greitens. The Republican governor faces possible impeachment proceedings over allegations he blackmailed a woman, hit her and coerced her to have oral sex with him.

Greitens also faces scrutiny from Missouri's Republican-led legislature over his alleged use of a charity donor list to elicit donations to his 2016 gubernatorial campaign. He faces a felony computer tampering charge for that.

He had faced a felony invasion of privacy charge for allegedly blackmailing a woman he was admittedly having an affair with, but that charge was dropped after the circuit attorney who brought it was added as a witness in the trial. She said the governor's team was trying to cause a distraction. Prosecutors are expected to refile that charge against Greitens.