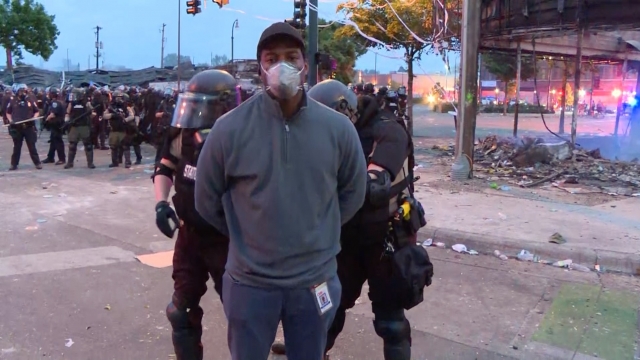 SMS
Reporter's Arrest During Protest On Police Brutality 'Inexcusable'
By Sasha Ingber
By Sasha Ingber
May 29, 2020
A CNN crew was covering protests for George Floyd, who died in police custody. Minnesota Gov. Tim Walz apologized for the arrest.
SHOW TRANSCRIPT

"If you’re just tuning in, you’re watching our correspondent Omar Jimenez being arrested by state police in Minnesota. We’re not sure why."

A CNN crew in Minneapolis was arrested early Friday morning on live TV. They were covering protests over the death of George Floyd, a Black man killed when an officer knelt for minutes on his neck.

"I believe we’re all about to be arrested. That’s our producer," a CNN journalist announced on live TV.

"The camera is being walked away now."

The reporter, producer and photojournalist were released about an hour later, around 7 a.m., according to CNN. Minnesota Gov. Tim Walz says he takes full responsibility for the incident:

"The idea that a reporter would have been taken while another police action was in play is inexcusable," Walz said.

Minnesota State Patrol announced the crew's release came “once they were confirmed to be members of the media.” The agency did not respond to Newsy’s request for comment.

"I was just as confused as you. We had been showing our credentials throughout this entire week and especially in the moments leading up to that," Jimenez said.

"Put us back where you want us. We were getting out of your way," could be heard in the video.

Media advocates are calling it a bad day for journalism.

"There is no reason that police should be arresting journalists who are covering a very newsworthy protest," says Courtney Radsch, Advocacy Director at the Committee to Protect Journalists. "We saw this live on television, we saw their calm demeanor. We saw the handcuffs nonetheless being put on practicing members of the press while they were reporting. There is no way to dispute the facts there. And, you know, in this era of fake news, that can be a very important attribute."

Critics also say it’s yet another example of injustice at the hands of law enforcement. Omar Jimenez, a Black Latino reporter, was arrested, while a White CNN reporter working nearby was not.

The National Association of Black Journalists condemned the arrest as, quote, “structural racism in real time.”

"You're reporting on some racism and then you become victim of what appears to be hostile or racial activity against you. And all you're doing is reporting what's going on," says Drew Berry, Executive Director of the National Association of Black Journalists. "We don't want it to be the norm. But unfortunately, it probably is pretty close to being the norm."