CNN Announces The Order Of Candidates For Democratic Debate 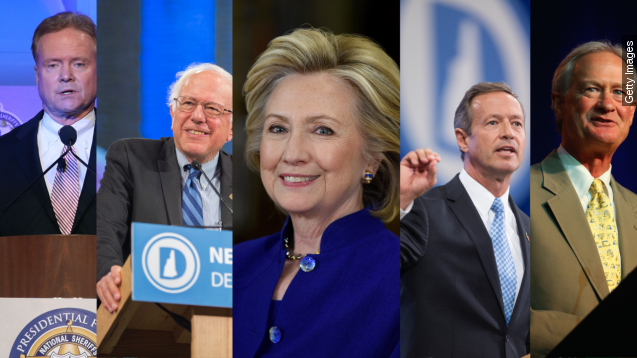 SMS
CNN Announces The Order Of Candidates For Democratic Debate
By Kate Grumke
By Kate Grumke
October 11, 2015
Vice President Joe Biden hasn't said if he'll run for president, but if he decides by Tuesday, he will have a spot on the debate stage.
SHOW TRANSCRIPT

The race for the presidency in 2016 has already seen two highly viewed GOP debates, but on Tuesday, the Democratic candidates will face each other for the first time.

The debate will be in Las Vegas and is hosted by CNN and Facebook.

The candidates will be standing in order of their rank in the polls since August. At center stage will be Hillary Clinton, to her right is Bernie Sanders, to her left is Martin O'Malley, and on the ends will be Jim Webb and Lincoln Chafee.

Vice President Joe Biden hasn't announced if he'll seek the nomination, but even without official word, he's polling high enough to merit a spot on the debate stage if he wants it. (Video via The White House)

Although the candidates will be standing side-by-side on the stage, their actual rankings aren't nearly as even. A Real Clear Politics compilation of multiple polls has Clinton in the lead at 42 points, Sanders at 25.4, and Biden at 18.6. O'Malley, Webb and Chafee are all polling at fractions of 1 point.

The candidates will likely face questions about their stances on gun control, the Trans-Pacific Partnership trade deal and immigration, among other issues. CNN's coverage of the debate begins 8:30 p.m. Eastern.