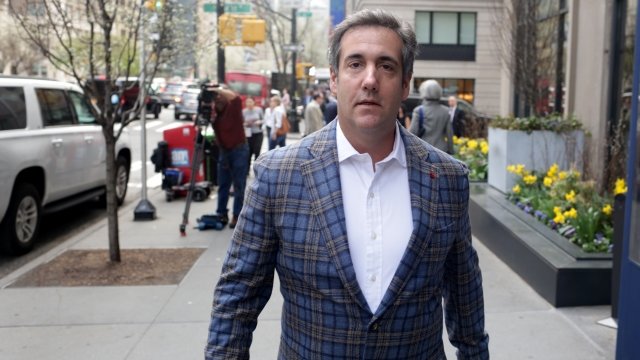 SMS
Trump Criticizes Cohen Over Secret Audio Recording
By Briana Koeneman
By Briana Koeneman
July 25, 2018
After CNN played the recording on air, Trump tweeted: "What kind of a lawyer would tape a client? So sad! Is this a first, never heard of it before?"
SHOW TRANSCRIPT

President Donald Trump is speaking out about a controversial audio recording that appears to be of him and his former attorney Michael Cohen.

Hours after CNN played the recording on air, Trump tweeted: "What kind of a lawyer would tape a client? So sad! Is this a first, never heard of it before?"

During the recording, Trump and Cohen can be heard discussing how they would buy the rights to a former Playboy model's story about her alleged affair with Trump.

CNN obtained the recording from Cohen's own lawyer, Lanny Davis, and aired it on "Cuomo Prime Time" Tuesday night.

"When it comes time for the financing, which will be..." Cohen said.

CNN says the audio was captured in September 2016, just two months before the presidential election.

Several media outlets reported on the existence of the tape last week. Sources said it contained a conversation between Trump and Cohen about payments surrounding a claim by a former Playboy model that she had an affair with Trump about 10 years ago.

Rudy Giuliani, Trump's current lawyer, has said no payment was ever made.

The FBI reportedly seized this recording and others during a raid on Cohen's office, hotel room and home earlier this year. As of Monday, federal investigators had a dozen of those tapes in their possession.