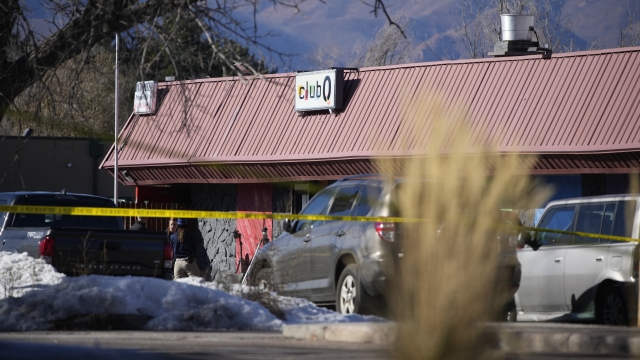 Investigators have filed murder and hate crime charges in connection with the mass shooting at an LGBTQ nightclub in Colorado Springs.

The 22-year-old suspect in the shooting at Club Q in Colorado Springs is facing five counts of murder and five counts of bias-motivated crime causing bodily injury. Prosecutors asked a judge to seal records related to the suspect’s arrest while the investigation is ongoing.

Witnesses said the gunman immediately opened fire after entering Club Q. The club has been a refuge for the LGBTQ community in a city that was once a center of anti-gay activism. From the outset, the city’s mayor said the attack appeared targeted.

"It has the trappings of a hate crime, given the club and the victims," said John Suthers, mayor of Colorado Springs.

Joshua Thurman was in the club dancing when the shooting began. He thought the sounds were part of the music until he saw the flash of a gun muzzle. He survived the attack, but he’s lost a sense of safety.

"Our community is shattered. This is the only LGBTQIA+ space we have in the city of Colorado Springs. Where are we going to go? We can rebuild. We can do things. But it's not going to take back those five people that died or the other 18 that were injured. Like, how can we now do anything knowing like something like this can happen?" said Thurman.

Police told the Associated Press the gunman used an AR-15-style semiautomatic weapon, but he also had a handgun and additional ammunition magazines. The mayor says someone grabbed a handgun from the shooter and hit him. The club’s owners say two others pinned the suspect down until police arrived. Sabrina Aston’s son, Daniel, was killed. He was a bartender at the club. She says he was always smiling, always happy and silly.

"It's just a nightmare that you can't wake up from. And I keep thinking it's just, it's a mistake. They've made a mistake and that he's really alive," said Aston.

"No matter what happened, he never had a complaint.  I never heard complaints coming out of him. It’s devastating to know that people that you care about can just disappear because of one person," said Charter.

Colorado’s governor has ordered flags to be lowered to half-staff at all public buildings for five days. The pride flag will also fly at the state capitol.