Closing The Book On Neverland Ranch, Now For Sale 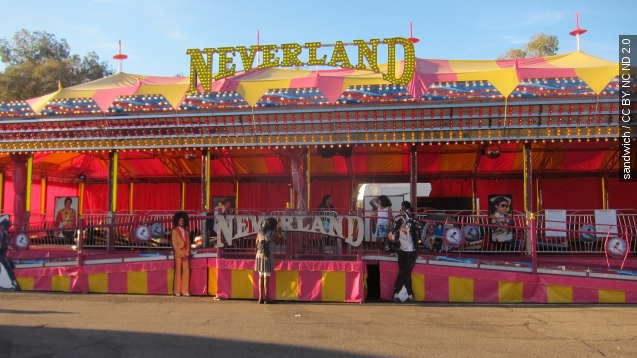 Michael Jackson's former home has been listed with Sotheby’s International Realty for a whopping $100 million, according to The Wall Street Journal. But the property formerly owned by the King of Pop now goes by a different name: its former title, Sycamore Valley Ranch.

Even more, the ranch, located just outside of Santa Barbara, California, has lost almost all the amenities MJ built. Sotheby's realtor Suzanne Perkins told The Wall Street Journal the amusement park and zoo — containing elephants and his monkey, Bubbles — are no longer there. The buyer will simply have to settle for lakes, rolling hills and fountains.

When Jackson bought the property in 1987, he paid a casual $19.5 million for the property, which he later renamed after Peter Pan's fictional island home.

MJ distanced himself from the property in 2005 after he "vowed" never to return to Neverland after his acquittal of child molestation charges. According to the Daily Mail, he felt his home had been "violated" after being raided by 70 police officers in 2003.

Jackson eventually defaulted on the $24.5 million he owed on the property, but he avoided foreclosure when Colony Capital LLC bought the loan in 2008.

Though he lived elsewhere until his death in 2009, his daughter, Paris, wanted to restore the mansion to make it available to underprivileged children.

But before the molestation charges and financial bailouts toward the end of Jackson's life, the home hosted several high-profile events, including Elizabeth Taylor's 1991 wedding to construction worker Larry Fortensky and Oprah's 1993 live interview with MJ in front of 90 million viewers.

Even more astounding than the celebrities and events that graced the property are the amenities that MJ constructed. We picked our top five biggest "wow" factors from Neverland.

The private dance studio comes as no surprise as No. 5 on our list. After all, people have been trying to "moonwalk" ever since he started the trend. (Video via YouTube / mymichael jackson)

No. 4 is the 50-seat movie theater with a "private viewing balcony."

No. 3 includes the 22 structures that make up the mega-mansion. We're talking basketball courts, barbecue areas, pools and tennis courts as just a few of the attractions on the land.

One of the few telltale signs that remains on the property as a reminder of the former owner falls on our list at No. 2 — the Disneyland-esque train and flower clock entrance to the estate.

Our No. 1 feature revolves around the rumored annual upkeep costs for the "Thriller" singer's former home. Want to guess? $3 million with around 54 full-time paid staff that maintained the estate.

But for all of you enthusiastic fans who might want to tour the property, sorry — Perkins tells The Wall Street Journal she won't be giving tours.