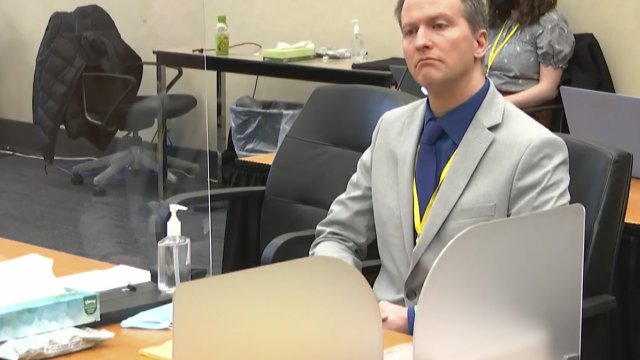 In its final push to convict former officer Derek Chauvin, the prosecution went point by point, detailing why Chauvin should be found guilty on all three charges he faces — second-degree murder, third-degree murder and manslaughter.

"He was trapped with the unyielding pavement underneath him. As unyielding as the man who held him down," Steve Schleicher, the special assistant attorney general of Minnesota, said.

Seen publicly for the first time, photo evidence of George Floyd's injured hands and face, from being pinned down. They tried to separate Chauvin's actions on that day from policing more broadly — referencing the seven different police who testified against Chauvin.

The prosecution also addressed several alternate theories by the defense about what killed George Floyd — from his heart condition to car exhaust. But the overarching theme for the prosecution from beginning to end was simply, "Believe your eyes."

Defense attorney Derek Nelson countered with a common defense for law enforcement on trial — what would a reasonable officer do.

Nelson also focused on the standard of reasonable doubt, saying the state has not proven Floyd died due to Chauvin's actions alone.

"I submit to you that the testimonies of Dr. Tobin, Isenschmid, Smock, Thomas and Rich, it flies in the absolute face of reason and common sense. It's astounding," Nelson said.

As the jury deliberates, they will be sequestered, meaning they'll stay in a hotel under guard overnight. As the jury makes its decision, the people wait and the city prepares. Downtown Minneapolis has been turned into a fortress while local businesses board up all over the city.

"[If] this prosecution cannot speak to the accountability of the systemic issues that are wrong with law enforcement and wrong with policing, then we're not going to see much of a change. And that's why I think you're still going to see people in the streets. That's why I still think you're going to see people advocating and being activists for more sustainable, long-lasting change," Andrew Gordon, deputy director of community legal services at the Legal Rights Center, said.