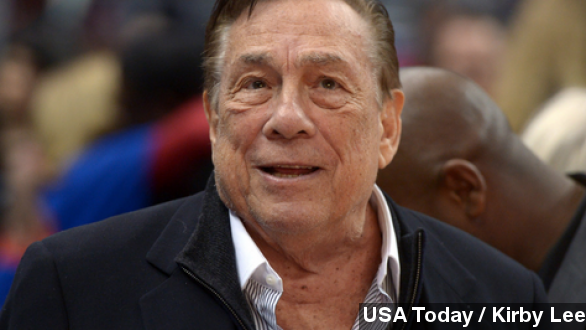 SMS
NBA Owner Not Receiving NAACP Award After Purported Comments
By John O'Connor
By John O'Connor
April 27, 2014
Clippers' owner Donald Sterling was set to receive a NAACP Lifetime Achievement award in 2014, and apparently it's not the first one he's recieved.
SHOW TRANSCRIPT

As controversy continues to swell around Los Angeles Clippers owner Donald Sterling, it turns out, ironically, that Sterling was scheduled to receive a Lifetime Achievement award from the NAACP.

According to the organization's LA chapter website, Sterling was set to be honored alongside Al Sharpton and LA Mayor Eric Garcetti at a May 15th gala commemorating the branch's 100th anniversary.

Now, in light of this audio recording from TMZ purportedly capturing Sterling making racists comments to his girlfriend.

Those plans have changed. Appearing on NBC's Meet The Press, NAACP Interim President Lorraine Miller told host David Gregory he will not be honored.

DAVID GREGORY: "You were going to give him a Lifetime Achievement award at the NAACP."

Lorraine Miler: "He is not receiving a lifetime achievement award from the NAACP."

The cringe worthy nomination isn't the first for NAACP's LA branch , as Deadspin notes Sterling was previously honored with a Lifetime Achievement award from the group in 2009, and a Presidents Award in 2008.

But "Soon after the [2009] announcement was made, much of the world learned of Sterling's unrepentant racism thanks to Elgin Baylor's employment discrimination lawsuit."

That lawsuit from Baylor, a former player and coach for Sterling, accused the owner of racism and embracing a "vision of a Southern plantation-type structure."

The NAACP said at the time they had already made plans to honor Sterling before the lawsuit was filed, telling the Los Angeles Times: "We can't speak to the allegations, but what we do know is that for the most part [he] has been very, very kind to the minority youth community."

Sterling, who bought the Clippers in 1981, apparently donates anywhere between 2,000 to 3,000 tickets to youth groups for nearly every home game. Totaling "280,000 tickets to more than 2,000 community groups over the last seven seasons."

But accusations against Sterling of racial discrimination have gone beyond the basketball court.

Also in 2009, Sterling, a real estate mogul, agreed to pay nearly $3 million to settle allegations that he discriminated against black and Hispanic families at scores of apartment buildings he owned around Los Angeles. (Via U.S. Department of Justice)

The NBA released a statement Saturday calling the remarks in the tape "disturbing and offensive," and is launching a full investigation. (Via ESPN) The Clippers playoff series against the Warriors will continue as scheduled with game four at Golden State Sunday.