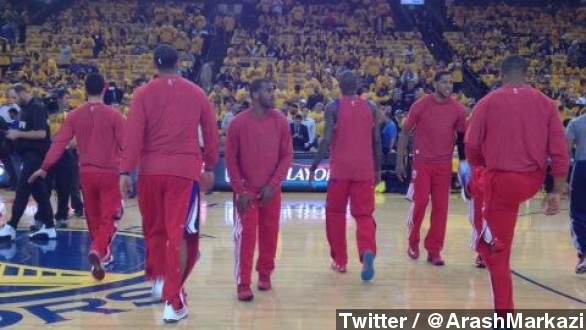 No one was quite sure how the Los Angeles Clippers would handle the controversy surrounding team owner Donald Sterling's alleged racist remarks.

And while the players didn't outright boycott Game 4 of their playoff series against the Golden State Warriors, they did stage what the media is calling a "silent protest" to take a stand on the controversy. (Via CNN, The Huffington Post, Sports Illustrated)

When the Clippers took the court Sunday for their pregame warm-up, the team left their Clippers jerseys in a pile at center court. Instead, the players warmed up in playoff shirts turned inside out. (Via Twitter / @ArashMarkaz, @MadelynBurke)

In compliance with NBA rules, the players did put their Clippers shirts back on when the game began. But the players were sporting black armbands and black socks, in what's been deemed another show of solidarity.

Unfortunately, the symbolic gestures didn't help the team on the court — the Warriors handily beat the Clippers 118-97, tying up the series 2-2. (Via Los Angeles Times)

The Clippers organization has been left reeling after TMZ published audio Friday of racist remarks Sterling allegedly made to his then-girlfriend.  Deadspin published an extended version of that audio Sunday containing even more racist comments.

The audio prompted immediate reaction from around the NBA. Miami Heat star LeBron James and Charlotte Bobcats owner Michael Jordan both said if the comments are confirmed, the league has no place for Sterling. (Via CBS, USA Today)

Even President Obama, on an overseas trip to Asia, weighed in on the controversy during a press conference.

"We've made enormous strides, but you're going to see this percolate up every so often. And I think that we just have to be clear and steady in denouncing it." (Via The White House)

NBA commissioner Adam Silver told reporters he's still investigating Sterling's comments. The league is expected to decide on a course of action before the Clippers' next game Tuesday.