Clinton And Trump Got Pretty Awkward During The Al Smith Dinner 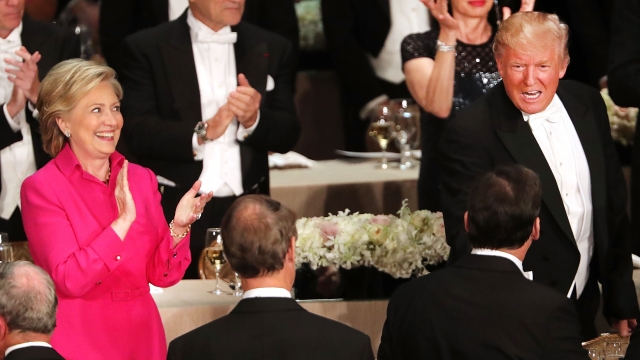 SMS
Clinton And Trump Got Pretty Awkward During The Al Smith Dinner
By Briana Koeneman
By Briana Koeneman
October 21, 2016
Donald Trump and Hillary Clinton didn't hold back during their speeches at the Alfred E. Smith charity dinner.
SHOW TRANSCRIPT

Donald Trump and Hillary Clinton were the keynote speakers at the Alfred E. Smith charity dinner in New York on Thursday night.

And things definitely got a little awkward. During election years, the dinner serves as a roast featuring the major presidential candidates. But both Clinton and Trump got booed more than once for their jabs at each other.

"Donald really is healthy as a horse. You know, the one Vladimir Putin rides around on," Clinton said.

"Hillary is so corrupt, she got kicked off the Watergate commission," Trump said.

And no scandal from the election was off-limits.

"Hillary believes that it's vital to deceive the people by having one public policy and a totally different policy in private. For example, here she is tonight, in public, pretending not to hate Catholics," Trump said.

But hey, at least it was all for a good cause. All of the money raised at the annual dinner goes to children in need.