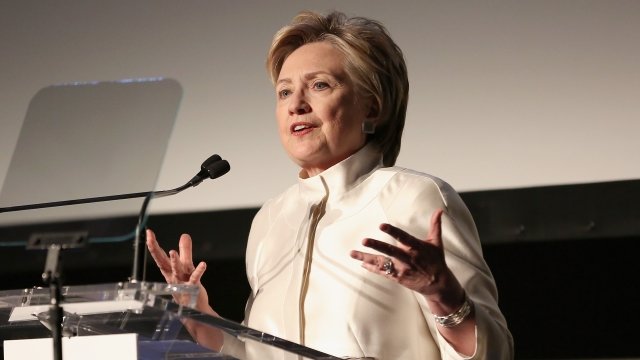 But the book is still likely to break sales records.

If you haven't heard, Hillary Clinton has written a brand-new book.

This is normal and expected for a candidate. Everyone knew Clinton would be writing a book after 2016. But the book, and specifically her book tour, is rubbing many Democrats the wrong way. Even some of her former staffers have thrown out phrases like "Oh, God" and "I can't handle it," even calling it "the final torture."

Democrats have tried to move on from 2016 and the old Clinton guard. And they can't do that for the next few months, the media is relitigating the election and chatting about Clinton every time she pops up at a Barnes & Noble.

Democratic Congressman Jared Huffman put it this way: "Maybe at the worst possible time, as we are fighting some of the most high-stakes policy and institutional battles we may ever see, at a time when we're trying to bring the party together so we can all move the party forward — stronger, stronger together."

Multiple autopsies have been penned about why Democrats lost in 2016, and some are wary about adding another to the conversation while they haven't figured out what really happened. But it seems Clinton doesn't think 2016 has been written about properly.

Many Democrats also say Clinton still hasn't shouldered the blame for 2016 like they want her to. They say she's too focused on Jim Comey, Bernie Sanders, Russia, Donald Trump and not taking enough responsibility.

Hillary Clinton is returning to politics, but she's not running for office again.

But in an excerpt from the book, Clinton writes: "I go back over my own shortcomings and the mistakes we made. I take responsibility for all of them. You can blame the data, blame the message, blame anything you want — but I was the candidate."

Despite Democratic reticence to Clinton's book tour, the events keep selling out, and the book has been on best-seller lists since it was announced. The conversation will likely take over multiple news cycles all fall long.