Clinton's Bad Press May Be Good Sign For Female Politicians 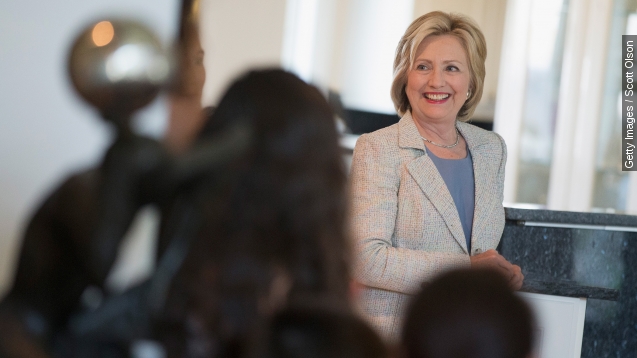 SMS
Clinton's Bad Press May Be Good Sign For Female Politicians
By Eugene Daniels
By Eugene Daniels
August 2, 2015
This time around, coverage of Hillary Clinton's campaign has focused almost entirely on her record and not her hair and clothes.
SHOW TRANSCRIPT

In Hillary Clinton's second run for The White House, the media has focused quite a bit on her record as Secretary of State — specifically, the U.S. consulate attack in Benghazi and her use of a personal email account. (Video via Hillary Clinton)

Now, I'm sure the Clinton campaign isn't thrilled about that type of coverage, but it could at least point to progress in how the media covers female political candidates.

During the '08 presidential election, both Clinton and vice presidential candidate Sarah Palin saw the media focus on things like their hair and clothes. (Video via C-SPAN)

"The obsession over, for example, her large clothing budget without much thought that if you're a woman on the campaign trail, you require a different kind of aesthetic maintenance," political and gender writer Rebecca Traister told CBS.

A study done by Name It. Change It. in 2012 found Palin's media coverage largely focused on or at least mentioned her physical appearance.

Clinton saw some of the same coverage of her hairstyles after the election while serving as Secretary of State.

"Your hair," ABC's Barbara Walters brought up the topic in a 2012 interview.

"I know that it's one of the great fascinations of our time, much to my amazement," Clinton said.

Discussions of "to scrunchie or not to scrunchie" aside, some of what was said turned pretty nasty and was more overtly sexist.

"She scares me. I cross my legs every time she talks. Every time," Tucker Carlson said on MSNBC's Tucker.

"She is the like the stereotypical, excuse the expression, but this is the way to — she's the stereotypical {expletive}, you know what I mean?" Glenn Beck said in '07 during his radio show.

At least this time around, the focus has been more about the issues and less about appearance or gender. But with more than a year to go in this election cycle, we'll have to see if the good behavior holds up.