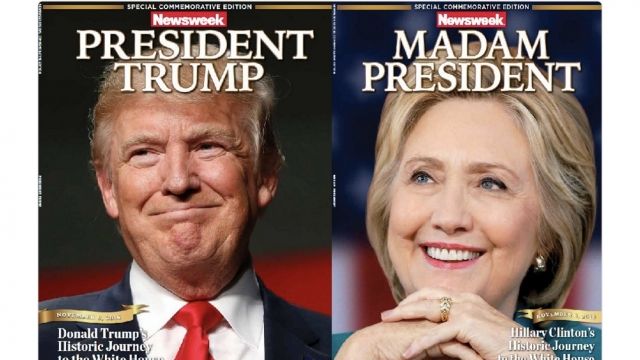 SMS
For Sale: Hillary Clinton 'Madam President' Newsweek Covers
By Ryan Biek
By Ryan Biek
December 1, 2016
The commemorative issues became infamous after they were printed and shipped before the election.
SHOW TRANSCRIPT

Or they could be worth 99 cents. Online sellers are trying to charge anywhere between a buck and $9,995 for the commemorative editions.

Many sites pointed to the cover as proof of the media rigging elections. But Topix Media, a Newsweek licensee, designed both a Clinton and "President Trump" cover before the vote.

And because many major polls had been predicting a Clinton victory, Topix decided to print and ship 125,000 copies of the Clinton edition ahead of the election.

The company timed the delivery so stores could sell them as soon as she won. Topix's CEO told the New York Post, "Like everybody else, we got it wrong."

Topix says it quickly recalled the Clinton copies after Donald Trump won but not before 17 issues were sold.

Which begs the question of how hundreds are now for sale online. NBC warns buyers that most of these Clinton copies could be fakes.