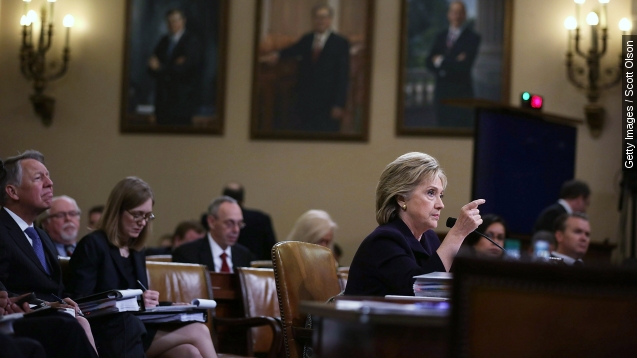 SMS
Clinton Hearing's Second Focus: Legitimacy Of The Hearing
By Kate Grumke
By Kate Grumke
October 22, 2015
The hearing was supposed to determine what happened in Libya in 2012, but much of the focus has been on whether Hillary Clinton is being targeted.
SHOW TRANSCRIPT

Today's congressional hearing with Hillary Clinton was supposed to focus on what happened on the night of the deadly attack on the American presence in Benghazi, Libya, but it also had another focus: the legitimacy of the Benghazi Select Committee itself.

In committee chairman Trey Gowdy's opening statement, he defended the need for the committee, saying investigations that had come before it had not been as thorough as this one. (Video via U.S. House Select Committee on Benghazi)

"I understand some people — frankly in both parties — have suggested this investigation is about you. Let me assure you it is not. ... This work is about something much more important than any single person," Gowdy said.

That has come into question in recent weeks after Kevin McCarthy said this on Fox News ... and after a former investigator for the committee accused the members of targeting Clinton for political reasons.

And in the questioning of Clinton, most Democrats on the committee also focused on what they perceive as the committee's political motivations.

"What is impossible is for any reasonable person to continue denying that Republicans are squandering millions of taxpayer dollars on this abusive effort to derail Secretary Clinton's presidential campaign," said Rep. Cummings.

"This committee is simply not doing its job. And I don't really think it should have been formed in the first place," said Rep. Adam Smith.

The committee is expected to release a final report of its findings to the House of Representatives when its investigation is complete.