Clinton Gets Closer To Securing Nomination With Virgin Islands Win 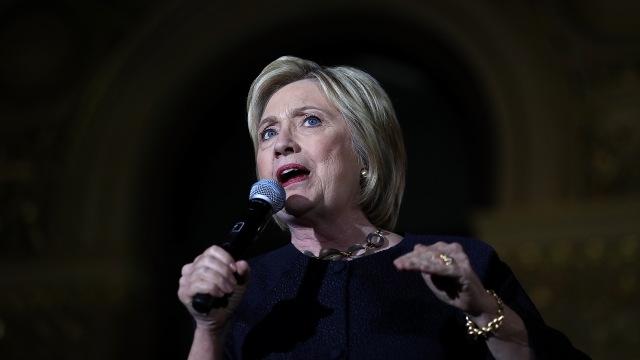 Hillary Clinton won seven delegates in the Virgin Islands on Saturday, pushing her closer to the 2,383 delegates needed to win her party's nomination.

Hillary Clinton swept the U.S. Virgin Islands caucuses on Saturday. Though a small delegate haul, the win puts her closer to clinching the Democratic presidential nomination.

Only seven pledged delegates were at stake in the Saturday race, and it appears Clinton will take all of them.

The magic number is 2,383 — that's the number of delegates — both pledged and super — Clinton needs to secure the nomination. Clinton is roughly 60 delegates short of reaching that number, though estimates vary on the exact number needed.

Sixty delegates are at stake in Sunday's Puerto Rico primary.

There's been little polling of the island, but Clinton's history with Puerto Ricans in New York state, where she was a senator, could help. While it's unlikely a win would allow Clinton to secure the nomination, it would probably make Clinton's Tuesday night a little less stressful.

New Jersey, California, North Dakota, South Dakota, Montana and New Mexico hold their primaries Tuesday. If all goes well in Puerto Rico, New Jersey will likely put Clinton over the top. It's no coincidence Clinton is expected to be at her campaign headquarters in Brooklyn that night. Clinton has already turned her attention to presumptive Republican presidential nominee Donald Trump.

"We are trying to elect a president, not a dictator," Clinton said during a rally on Saturday.

But Bernie Sanders has vowed to fight all the way to the convention. He said Saturday Clinton is dependent on superdelegates and neither of them will have enough pledged delegates to secure the nomination.

"The Democratic National Convention will be a contested convention," Sanders said.

Delegate-rich California could help him out — polls show Clinton and the Vermont senator are now neck and neck.

However, he'd still need hundreds of superdelegates to switch their support from Clinton to him.

So get your popcorn ready. It appears it will be an exciting summer.