Fact-Checking The Wildest Things Said About The Clinton Foundation 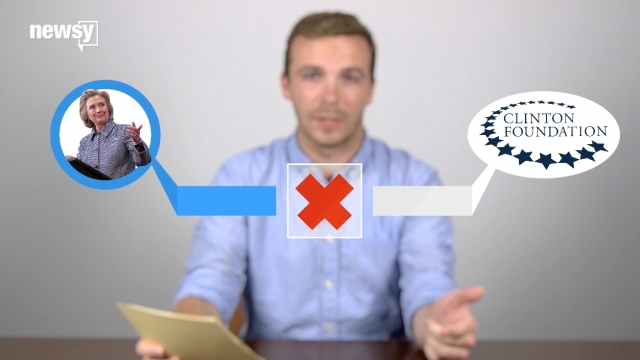 All right, so you sent us things you've either heard or seen about the Clinton campaign and its campaign finances. I've got them right here. So I'm going to tell you if they're fact or fiction.

First up, the idea that the Clinton Foundation funds go to the Clinton campaign. That is definitely fiction.

Also, I've seen people say only 10 percent of Clinton Foundation donations go to charity. That's not true at all.

Independent studies found 88 percent went to charitable causes like health access and fighting poverty. The website Charity Watch actually gives it an A. To compare that with some other popular charities, that's a better grade than the American Red Cross got and far better than Wounded Warriors. Overall, the Clinton Foundation is a pretty charitable charity.

Clinton approved the sale of uranium to Russia to line her own pockets? Mostly fiction, but there is some truth to this, so just hear me out.

A few points: One, this was not Hillary Clinton's decision alone. Nine federal agencies, including the defense, treasury and Justice Departments and even state regulators, had to sign off on this purchase. And the guy in the State Department who headed up the decision told Time that Clinton never intervened on the issue.

Two, we're not talking about a lot of uranium. The U.S. produces 2 percent of the world's uranium. We get most of ours from outside the country. The Canadian company acquired by Russia produces 11 percent of the uranium in the U.S. No doubt they were more interested in the company's assets in Kazakhstan, which are a lot larger.

And finally, most of those donations to the Clinton Foundation were made before or during her 2008 run for president, when there was no way she knew she'd become Secretary of State. That makes the whole idea of quid pro quo kind of far-fetched.

But on a related note, Bill Clinton took $500,000 for a speech in Moscow. And that is a cold hard fact. Speaking gigs are a pretty sweet deal for ex-presidents, and Bill Clinton has really cashed in on it.

He gave 13 speeches for half a million dollars or more between leaving the presidency and Hillary Clinton leaving the State Department. One of those was in Moscow and paid for by a bank with ties to the Kremlin. And that was after Russia said it was interested in buying that Canadian uranium company from earlier.

This was first reported in the book "Clinton Cash." That book found no evidence of a deal being made, but the whole thing is a pretty serious conflict of interest for Hillary Clinton and for the State Department.